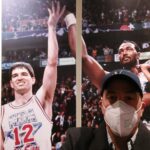 I am writing this last installment from a 4 hour delayed Amtrak to Pittsburgh.  I was supposed to be off of this train 3 hours ago, but engine troubles in Chicago and freight traffic derailed that plan.  Because of the extensive delay, my connecting train from Pittsburgh to Newark has already left the station so a bus in Pittsburgh will take me to my final destination of New Jersey.  I have often compared my comedy career to a horror movie – when you think victory has been secured, THAT is when the villain arises from behind and slits your throat.  The final leg of my “Paid Vacation Tour” (as I joked with the crowd in Utah – better for your mental health to say “I got paid for comedy while on vacation” than “my comedy gigs keep losing me money.”  So here is the Utah/journey home finale of the early 2022 road recap series.

Wednesday: Road Warrior to See the Jazz Beat the Warriors

The girlfriend (Laura) and I left Vegas early on Wednesday morning to make our way to Salt Lake City for the Jazz-Warriors game.  Since I have been behind the wheel twice in the last 21 years all the driving would be the responsibility of Laura.  Averaging 90mph for 6 hours we arrived in Salt Lake City shortly after 4pm.  But not before stopping for gas and a nature photo in Provo

The game that night started poorly with a 13-0 Golden State run, but for most of the game after that the Jazz kicked their ass. That made my career record 2-0 when attending Jazz games in person in Utah.  Might be time for a key to the city.  As a bonus, I was invited on for an hour with the local ESPN radio affiliate to talk comedy and the Utah Jazz on Friday’s show.  Of course, in classic J-L form – that appearance would be a day after my Thursday show in Jordan, Utah so it only counted as promotion for Utah people with time machines.

Thursdays Were The Best Days

Thursday started with a nice breakfast at the Homewood Suites we were staying in and then it was time for my (now legendary) visit to the Utah Jazz team store.  I ended up spending $666 on merch (the mark of the hype beast?), but more importantly I made my first real goofy tik tok that people seemed to enjoy.  Since the store was empty at 1130 am except for employees (who, like everyone we encountered from Utah, were incredibly nice) I had free reign to film various video clips, which I stitched together into a Pretty Woman parody.

After the shopping spree we toured some of the LDS sights downtown and then met a longtime Twitter friend (Spencer Hall – a big Jazz blogger I began following like 12 years ago who looks like a boy band Tim Tebow and also, as I would learn, is some kind of connected dude in Salt Lake City) for dinner. Here is a pic of us in front of a giant Jazz mural that he and his lady brought us to.

Then we headed to Jordan Landing for the show at Wiseguys.  I will be putting out a 21 minute video on my YouTube later this week called The Utah Jazz Mini Special.  About 15 minutes of the set is Utah Jazz material and a new bit about Mormon history that I learned on our tour of the LDS sights referenced above.  The show was a home run and thanks to the crowds in Chicago, LA and Utah I sold out of the merch I brought with me. A truly great night until I got back to our hotel and Laura asked “Where is your jacket?”  See, when you are so hot on stage you can literally heat yourself and not realized you don’t have a coat until an hour later, despite Utah temperatures.  But the next morning, on his way to his day job, the Wiseguys manager that night, Jose, brought me my coat to the Homewood Suites.  Like I said, super nice people. 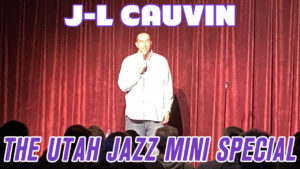 On Friday, after a poor night of sleep because I was coming to grips with the fact that I would have to re-shoot my comedy special (listen to this week’s Righteous Pk podcast for some laughs and despair), I made my way to the local ESPN radio affiliate for an hour on air.  It was a great time talking comedy and some hoops with Spencer Checketts before heading to the Toyota Club of the Vivnt Arena at 530 for the complimentary buffet/banquet before the game (when you buy 8th row center court seats you get some perks… like sitting next to 10 year olds with rich parents).  The Jazz won the game, running my streak to 3 wins while attending Jazz home games (definitely deserve key to the city). 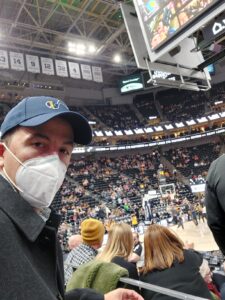 We then went back to the hotel to sleep because I had a 3:30 am train out of Salt Lake City Saturday.

Planes, Trains and What the fu*k is Happening?

I got my train at 3:30 and settled in for an additional 2 hours of sleep. Laura, who was flying home, would end up having a 10 hour delay in her departure, turning a noon flight into a red eye. During her trials and tribulations I would end up having the most beautiful train ride of my life in the Colorado portion of the trip (just like Kansas was the state to sleep through on the way to LA, Nebraska earned that designation on the California Zephyr route to Chicago.

When I arrived in Chicago is when everything went to shit.  No need to bore you with the details, but I am still not in Pittsburgh and my dog Cookie puked this morning, which means one thing: it is time for me to be home already.  Thanks for reading – I hope you enjoyed this three week odyssey (remember to subscribe to my YouTube and Instagram for all of my travel photos and sketches- and lastly –  tune into Billions on Sunday the 20th for my cable drama debut.