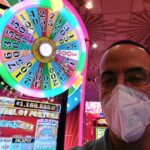 As a break between gigs in Los Angeles and Salt Lake City, I did something I have not done since 2018 or 2019… I took a vacation!  Admittedly it was a 24 hour vacation to break up travel between Los Angeles and Salt Lake City, but it still counts!  The only two times I have visited Vegas in my life were both with my family. The first was in college with my basketball team and my family visited so I did no gambling and no clubbing (and to be honest not even that much basketball playing) and the next time was to take my Mom for her birthday with my brother many years ago.  it was fun enough, but buying three tickets to Thunder Down Under was a lot more awkward than we anticipated.  So this time I was meeting my girlfriend for a Masks Up, Finances Down trip to Sin City!

I took an 830 am Greyhound from LA to Vegas and unlike my bus ride from San Jose with 3 recently released felons (see previous road recap blog) this bus ride really felt like it had a criminal element.  The woman behind me was going to get her son who was recently released and the woman next to her never stopped talking on her phone for 5 hours (no mask – so spreading her profanity-laced droplets). In the back of the bus, which I ventured through only once for a Cirque du Soleil-level piss on a moving bus, I saw an awkward white dude surrounded by sleeping Black dudes and it made me laugh because it felt like a Greyhound reboot of The Mad Real World from Chappelle’s Show.

When I arrived at the Vegas bus dept, I hopped on a local bus with an incredibly unhelpful bus driver (DUDE – YOU WORK AT A TRAVEL DEPOT IN A TOURISM CITY – HOW DO MY QUESTIONS BOTHER YOU?).  I arrived at the MGM Grand and my girlfriend met me on line waiting to check in.  We had a large room, but had to walk down a long hallway that smelled like a stripper ready to go on stage (post perfume, pre-sweat and Champagne Room).

Then it was time to gamble.  Long story short on gambling – the Wheel of Fortune machine was our best friend.  I ended up losing money eventually, but the only time I was in the plus was with my success on that machine. My girlfriend, meanwhile, crushed the shit out of the machine, winning every time except for once.  I lost everywhere I went – Game of Thrones and Little Shop of Horrors machines ended up murdering me (I know the fun-theme machines suck because casinos know you will play based on the theme regardless of how expensive the plays or how bad the pay outs… but I did it anyway).  I then placed $20 on my college number (33) on roulette.  The only positive to losing that is that a couple wearing Let’s Go Brandon masks followed my lead with more expensive bets, hoping I would be good luck.  So they lost their MAGA dollars at least.  I must admit, I did not have the same level of disdain for them as the usual MAGAts because they were following casino rules on Covid, which plenty of people were not.  So if it’s between hating Joe Biden and not spreading Covid and hating Joe Biden and spreading Covid, I will tip my ironic red hat to the former. 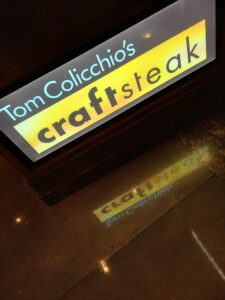 Then we went to Craftsteak, an outstanding and expensive restaurant in the hotel.  I was able to retroactively count it as Valentine’s Day dinner, so that means I get a break Monday… pizza party!  Then we headed to see Vegas/Magic legend David Copperfield.  We both enjoyed the show, though some of the theatric elements were a little too much for me.  And, as a big fan of the show Arrested Development (the greatest tv comedy of all time – Netflix seasons do not count), it is hard to take magic 100% seriously after Wil Arnett’s GOB performance.  And the most inadvertently hilarious part of the show was how many non-English speaking/barely speaking people Copperfield ended up selecting for demonstrations. 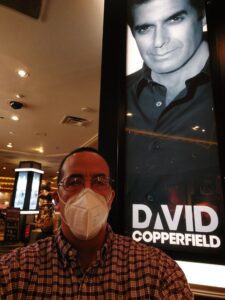 So that was it – the next morning we got out early for a 6 hour drive to Salt Lake City, which is where I am typing this now.  The epic Salt Lake Recap will be written Saturday from Amtrak as I wrap up the epic vacation/tour.