This weekend I was booked almost last minute to headline McGuire’s Comedy Club in Bohemia ON Long Island (I was told after the show not to say I am “in” Long Island).  Now whereas Long Island’s politics range from Trump to Don Jr in the towns I have played, the closer you get to the Atlantic Ocean the more those Trump politics become more Ginni Thomas and Marjorie Taylor Greene.  But with the re-shoot of my special a little over a month away, a decent check for a one show gig and nothing else on my schedule I said I would take it (my first time at this club).  It ended up being a great show for reasons I will detail and the great show was merely the opening act for other great news Saturday would bring.  So without further adieu!

My day actually began with a trip to Riverdale in the Bronx to pick up a bookshelf from my Mom’s apartment.  (The Bookshelf also sounds like an awful A24 film that would be nominated for 4 Oscars).  I have exceeded my bookshelf capacity in my apartment (NERD) so I asked if I could I could take one of my Mom’s which would fit my needs and match with my dog Cookie’s color scheme.  So I took a 9:55am bus from Bloomfield to Port Authority Bus Terminal to the A train to 168th street, transferred to the 1 train, got off at 231st street greeted by a 3 minute rain/hail storm (seriously the 3 minutes couldn’t have happened during the preceding 100 minutes I was inside transportation?) and then the Bx10 bus to my Mom’s apartment (a/k/a my childhood home).

I hung out with my Mom for a couple of hours, during which she asked why I did not shave if I had a show, at which point I told her 4 days of Islamic teen stubble on my face (the closest I can really get to a beard) would be the least of my worries performing for the OAN fan club.  Then the guy with a truck I hired to move the book shelf arrived. We put it in his truck, which he delivered to Bloomfield, NJ and I made my way back to the A train to catch a 4:24 train to Oakdale, Long Island.

Both legs of my Long Island RR trip were not very crowded, but on each train I managed to have mask-less MAGA dudes sitting next to me, one of whom apparently though that even covering your mouth when you cough or sneeze was too much of a concession to the woke mob.  When I arrived in Oakdale I ventured into a Dunkin Donuts to kill time before ordering my Lyft to the club, which was approximately 4 miles away.

When I arrived at the club I saw that it was pretty packed (Free Ticket Energy) and I gave my intro to the manager. I decided Howard Stern and Billions would be well known and helpful credits when performing in front of Newsmax Plus and the manager immediately deflated me when he came back to me and said “Now Howard Stern is a radio show?  And – ohh Billions is a TV show!”  And yes, my name was wrecked at the top of the show as well giving me the triple crown of “Who gives a sh*t who the headliner is” vibes.  Everyone was very nice though so I sort of didn’t give a sh*t either.

After the emcee and feature both got the crowd going I went up and had one of the best sets of my life.  I don’t mean it was the funniest I’d ever been or it was the tightest set I’d ever had.  But over the course of an hour, while never ceding any ground or trying to run from the fact that I am a Biden-voting Democrat that thinks the Trump family is a huge pile of excrement, I won them over big time.  Like Johnny Lawrence handing Daniel the trophy at the end of Karate Kid level respect.  I got big laughs, a few harmless heckles, zero slaps and fairly robust merch sales after the show.  I also had a discussion that probably turned into a podcast with a group of hard core MAGA dudes that loved my set.  And one of the keys to my success, which I loathe to give away, is that I have come up with the perfect way to untighten right wing crowds when they hear stuff they don’t like (which was like 4 times during my set).   By the end of the show I felt like I had gone into an opposing team’s stadium and dropped 45 on them (points, not Trump hats).  Even better analogy, I felt like Rocky in Rocky IV in Russia (and not just because half of the crowd probably supports Putin) as the crowd realizes that what they are watching from the Italian (looking) guy is undeniable.

UpLyft for the Soul

So after a show that went great and the fact that my next possible train out of Oakdale was in an hour, I decided to check the Lyft app and saw that a car from the Atlantic Ocean back to Bloomfield, NJ was only $108.  It would also get me home before the beginning of SNL. So I said – “fu*k it – I am treating myself after this perfect day of book shelf moving and comedy crushing.”  My driver arrived, a young, eager to please Indian (I believe) fellow.  He accepted the ride, but seemed sort of nervous about going what would be a very long drive.  I assured him I would give him a big tip.  At that point he pulled over to a rest stop and I had to tell him I meant money.

So as he drove at a fast, but still controlled speed I could see that he was on pace to get me home in 70 minutes instead of the estimated 90.  So with 30 minutes left in the ride I asked my Twitter followers to Venmo me money for the driver and I would add their money to my $50 tip.  Well when we got to my building at 11:08pm I gave him $50 tip on the app (the max it would allow which seems stupid) and $141 in cash representing the donations from fans.  He was very grateful and I thought, what a great end to the night. Little did I know it would get even better 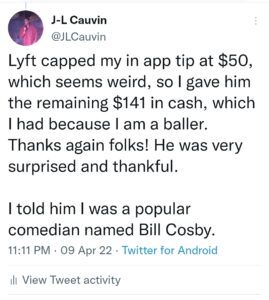 From Bookshelf to Booker

When I got upstairs to my apartment, I looked on my phone and saw that a video I had posted earlier of me impersonating NJ Senator Cory Booker had been retweeted… by Senator Cory Booker!  So the video has been blowing up for the last day (I just added an Eric Adams video to Twitter and YouTube).  And as the cherry on top of an absolutely perfect 14 hour run, I did not think SNL sucked!