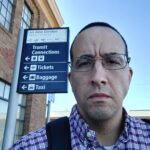 I sit in my hotel writing this latest road recap from Hotel de Anza, a hotel in the shadow of Zoom’s headquarters (I think – or just a large building with Zoom all over it – if you do a live corporate gig at Zoom, is it still a Zoom show?) after a mostly fun night in San Jose and a 21 hour day.  I hung out with some friends, met some of my most die hard fans, had some merch stolen at the show and accidentally fooled my Mom about the stains on my Greyhound bus seats. So without further adieu, and before I have to check out of my hotel let’s do this!

On Wednesday I woke up at 4am to get my 515am bus. Fortunately I had not yet modified my sleep schedule to the west coast so it was not as difficult to wake up at that hour (went to be at 10pm), but my buddy Nick, who is letting me crash with him in LA, apparently just pulled an all-nighter to take me to the bus.  As my home away from home for almost a decade, Nick has been the unsung hero of all of my west coast trips.  He got me to the station which at 445am was an interesting mix of exhausted immigrant families and Black dudes talking about YouTube fight videos.  I hopped on my bus (silver lining to taking the early Greyhound – you don’t get shot on a Greyhound later that day in California) and grabbed the handicapped seat which provided more leg room than any first class flight accommodations.  The bus never got too crowded – I had my own seat the entire 9 hour trip and the ride was absolutely beautiful. California really is a beautiful state, even when travelling on seats that looked like they are covered in semen.

Now as the bus got more crowded, a few people started coming on without masks. And in a weird move, the guy next to me had a KN95 mask that he wore on his chin for most of the ride.  As I joked on stage in San Jose, “so you upgraded your mask, to protect your chin?”  But I opted to fume silently at the selfish, rule breaking and I think I made the prudent decision (see article about deadly fight on bus above).

I arrived in San Jose, which was beautiful and sunny and windy AF.  Northern California always seems super sneaky with the weather: “Oh look it’s beautiful… and 62 degrees and… holy shit that wind is making me cold AF!”  My hotel was a quick 10 minute walk from the train/bus station. After checking in and mapping out my set I met up with my friend Hank from law school who made the drive from San Francisco and Brandon (no, not Joe Biden – a man actually named Brandon), a friend through my bff who went to college with him. We had dinner at a local food hall and then made out way to the Improv.

The club was great – it is sort of an old theater type space and thanks to some good fans (and good efforts by the club to fill seats) I ended with up with a pretty good crowd.  In addition to bits from my (cursed) special – please go to the podcast tab and listen to the new bonus episode of Righteous Pk if you don’t know – I dropped some brand new, off the dome bits on Clarence Thomas, masks on Greyhound, how me and my Uncle looked like a Law & Order casting in the Bronx (this was just something I said to someone who worked at the Improv and then he said “do you do that on stage?” – WELL I WILL NOW!), the single best Trump impression I’ve ever done and some other shit I have already forgotten (but thankfully have on tape) that did well.

After the show I met some fans who are almost as well known to me as I am to them because of their strong engagement with me. It always feels good to meet fans like that (so that your comedy feels less like a distraction and more like *pretentious voice* appreciated art).  But there was a blemish on an otherwise socially and comedically enjoyable night.  A fan walked up to buy one of my USB cards (the $40 cards have all 6 of my stand up albums so it is a good deal). He asked if I took credit cards. I said that I did and I pulled out the square addition for my phone to swipe his credit card, but then realized I had left my phone in the showroom.  I asked him to wait and ran, got my phone and made it back to the table within 15 seconds.  When I returned he was gone and so was one of my album cards.  Now the crazy thing about this is based on the interaction (he was ready to pay and could not have known I did not have my phone on me) he made the spur of the moment decision to steal from me.  I hope he enjoys the albums.

Hank, Brandon and I went to a local pub for a beer with a fan who was effusive in his praise for my comedy and even more effusive in his praise for his Ivy League PhD and claim of having a large penis.  After that was done, we made a run to the local Insomnia Cookies, which claimed to be open until midnight, but was already closed when we arrived at 1135pm.  Instead we went to an ice cream shoppe and then said our goodbyes (PhDick had already made his way back home).

So today’s agenda is: do a Mike Lindell pillow review from my hotel before checkout, record a cameo for someone and then get on an Amtrak bus/train trip back to LA (9.5 hours for reading and watching some movies), and, if on time, perform around 1030pm at the Hollywood Improv.  Every day in my comedy career is basically like an awful season of 24.

Thank you San Jose!  You were great, except for the theft!