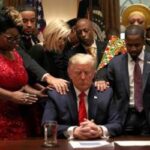 As I listen to podcasts and read articles about the hopes of conservatives have of getting a “pro-life” judge on the Supreme Court to replace Ruth Bader Ginsburg, I feel like it is time to update Christianity and the Bible for Trump Christians.  For example, Jesus 1.0 asked “What does it profit a man, to gain the whole world, and lose his own soul?”  But wouldn’t Jesus 2.0 say “When you’re a celebrity they let you do it?”  And when Jesus 1.0 said “Easier for a camel to pass through the eye of a needle than for a rich man to enter the Kingdom of Heaven,” wasn’t he just being an unsuccessful loser?  Wouldn’t Jesus 2.0 say “Please donate so I can buy a private jet to deliver the Gospel?”

I think of this as Judge Amy Coney Barrett is the front runner for the Supreme Court nomination because of her strong legal credentials and even more importantly, her pro-life credentials. She is a Catholic, as am I, and yet no one seems to have asked if she thinks the death penalty is unconstitutional. She also has a special needs child that she chose to keep (a beautiful personal choice for sure) and she adopted two Haitian children (I am sure she won’t mind thanking a man who called their native country a shithole) so she seems to walk the walk.  I don’t know if she is as dedicated to abolishing the death penalty, but my guess is not.  Perhaps it is because, despite her Catholicism, she shares a lot in common with Trump Christians. Trump Christians, previously known as Conservative Christians or Conservative Evangelical Christians, appear to believe in a Jesus-less brand of Christianity. They are people who appear to have replaced John the Baptist with Ralph Reed and Jesus with Donald Trump (after all, Jesus was not actually a Christian, as I have pointed out in many of my satirical Trump videos).  I think conservative Christians in this country are basically savvy marketers who have chosen to adopt the wrath of the Old Testament with the popular branding of Jesus, while ignoring what Jesus said.  After all, if they only like the Old Testament then that would make them Jews (“yikes!” said the conservative followers of Christ who think supporting Israel to bring about Judgment Day constitutes supporting Jews).  If this were a modern day conservative Christian marketing team, Jesus would be complaining to the press that he was brought in for PR and diversity numbers but that his views are not being heard or respected.

So because Jesus is basically being used for branding purposes I think it is time to start redefining Trump Christians from the ground up. So let’s start with the Ten (Trump) Commandments for Conservative Evangelical Trump Christians:

So now we are finally building the foundation for a more honest and righteous Trump Christianity – actually Jesus was sort of too nice, so let’s just call these folks Trumpians.