Donald Trump is a Terrorist 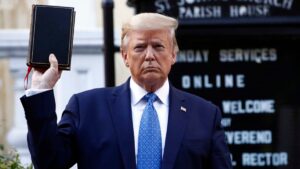 A middle child of privilege. A man with deep contempt for the majority of Americans and its principles.  A man who used a warped vision of a world religion to produce fanaticism among his followers. A man whose leadership has led to the death of thousands of Americans.  This is a description of Donald Trump, though you could be forgiven for thinking I was referencing Osama bin Laden.  In America, we have become reflexively accustomed to equating terrorist with Muslim and/or Brown, but make no mistake: Donald Trump is a terrorist.  His whole life he has lacked both courage and faith, but do not think of him as a fanatical warrior engaging in actions that strike fear into people. Think of him more as the leader who issues orders and spouts religious platitudes while committing adultery and looking at porn in his private quarters.  Dictionary.com defines terrorism as “the use of violence and threats to intimidate or coerce, especially for political purposes.” By that definition can there be any doubt?

I think I need to acknowledge the fact that many people colloquially think of a terrorist as a sort of violent, religious fanatic, or at least someone conducting their terror with religious undertones.  Obviously the definition does not require this, but real life and dictionary definitions can often diverge.  For those more inclined to link terror with religion, I would ask: doesn’t Donald Trump often wed a religious fanaticism to his political objectives? Donald Trump has no religious convictions, but is very happy to weaponize religion to suit his pursuit of power.  As I have often thought of some fundamentalists (I am a Mass-attending Catholic for what it’s worth), faith becomes a post-fact rationalization for desired effects.  For some it is violence. For many it is misogyny. For some it is to repress things about themselves.  For Trump it has been an easy way to weaponize a group of people who want to win more than they want to embody Christ.  He clearly believes in none of it, but he is willing to conduct violence on peaceful protesters just to send signals to his true believers that he is a tip of their religious spear. Combine that with lies and misrepresentations about abortion and inane declarations like “Joe Biden wants to hurt God” or “get rid of Churches” and you have effectively primed your religious fanatics for a Holy War (likely with trademarked merchandise).

Donald Trump issues calls to violence repeatedly but because he and his followers are white, “Christian” men they are called patriots instead of armed fanatics following their leader’s fatwas  From claiming “2nd Amendment people” could take care of candidate Hillary Clinton, to demanding Michigan and Virginia be “liberated” (and a non-vague reference to the 2nd Amendment in Virginia’s case) he has consistently encouraged violence on the part of his followers as the way to fight for his cause (himself).  He could not even bring himself to condemn the racists in Charlottesville because it would have contradicted his one and only goal: retaining his most fanatical and solid supporters.  The political aim is always about him and his reelection and he will both encourage violence and ignore violence if it clashes with his sacred purpose of protecting Donald Trump’s power.

But beyond his direct calls for, or ignoring of, actual violence Donald Trump’s self-absorbed “leadership” has also cost tens of thousands of lives.  Not pursuing Russian bounties on U.S. troops, lying about the risks of Covid to protect his economic numbers, failing to properly provide for the American people and then diminishing the risks of Covid again as the election nears he has shown at best, a grave indifference to the lives of American people, especially those in Blue states.  In other words, those who did not support him were expendable.  If “Terrorism by omission” were ever a thing he would be its supreme leader.

In summary, Trump encourages violence, looks the other way when his supporters engage in violence and prioritizes his reelection over the safety of Americans, especially the ones from places that do not support him.  And as the cherry on top, sometimes, “friends” of his like Herman Cain are simply collateral damage. Unwitting suicide bombers in a Trump 2020 jihad.

These words will come off as sensationalist or incendiary to some, but I mean them.  If Donald Trump were running another Democracy this way we would be encouraging new leadership. If he were in charge of a young democracy or a developing nation I think we would either have the CIA or SEAL Team 6 seeking his ouster and would cheer his downfall as a victory for Democracy. But he is a white, American, self-proclaimed Christian and he is afforded all the protections those labels provide while representing a daily threat to human life, Democracy and the founding principles of this country.  Fans of Trump, like the rabid moron Alex Jones, love to claim that 9/11 was an inside job. Well, Trump actually is an inside job. We put him in office and he is causing more death and lasting damage through commission and omission than any terrorist ever has or ever could.

As heinous as 9/11 it did not break us as a country. In fact it unified the country, at least in the pre-Iraq War days.  Donald Trump’s brand of terror is not an isolated incident. It is a governing strategy and personal philosophy and it is ongoing.  Donald Trump’s terrorism does not profess to serve God or Yahweh or Allah. He serves himself and is willing to sacrifice all in that service and that should earn him at least as much scorn and condemnation as the agents of death and fanaticism that have preceded him.