It has been several years since I attended any comedy festival and 10 years since I made a good, but failed run at the Boston Comedy Festival.  But in the “hope springs eternal” mindset that rests beneath numerous layers of “fu*k this sh*t” I entered the Boston Comedy Festival again this year. My mindset was fairly practical in entering. The prize for the winner was $10,000.  With 96 competitors I figured odds were in my favor (imagine buying a $600 lottery ticket – train and hotel fare – but your odds of winning $10,000 was 1 in 96 – but really much better than that based on experience) so I entered.  Also, a much less important factor I figured was with most comics of my comedy generation either finding success or permanent obscurity it was time for me to meet the next group of comedians who might pass me by in the next five years. Either way I figured there were enough reasons to give it a shot.

So after spending several hundred dollars I went to my preliminary round Thursday night and had a really good set. And then at the end of the show when the comedians going on to the semi finals were announced I figured I was definitely in the top 5. And I may have been right, but I was not in the top 3, which was the number of comics advancing.  And just like that I felt like Scatman Crothers from the Shining. I had gotten on my Snowcat (Amtrak) and traveled many miles to show up to save the day, only to have a comedy contest ax buried in my chest.  But like many things in comedy, I am calloused at this point to where I can just sort of shrug it off in a few minutes (by contrast losing in the semi finals in 2006 took me… oh wait I am still not over that robbery).  Silver lining 2 of the 3 comics that made the semis from my prelim also made the finals, meaning that we had a disproportionate number of finalists.  The system really is rigged! 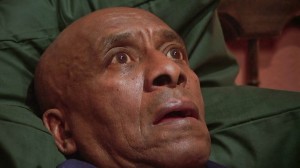 When you have a vision of being a hero in Boston, but get axed in the 1st round

After the show I had a couple of comedians and audience members tell me that I should audition for SNL. It was a nice compliment and I will get on that as soon as I find a way to make it to the semi finals of a comedy contest.