Road Comedy Recap: Cleveland and The Electoral Map of a Murdered Smurf

This week I have been in Cleveland, my home away from where John D. Rockefeller started his empire, where Drew Carey got  fat and where I have appeared more than any other city outside of NYC and LA.  Basically I have been like Andrew Miller for this city, but over the last 7 years – 6’7″, immensely talented, unwanted by NY and delivering amazing performances.  This week has been no different and the city has been in need of healing (but apparently not in need of comedy albums as my 1.0 albums sold per show rate demonstrates) since it was the only Democratic stronghold in the city on Election Night.  I have told audiences that their state looked like a murdered Smurf because there was this tiny blue spot in the top of the state and blood red pouring out of it to the entire state.  So just like a bases loaded jam in the playoffs for Miller I arrived in Cleveland (under my urban room moniker of “Vanilla Coke”) to deliver some comedic healing… to the audience members that were not talking or texting or coming in late).  Here ya go:

I had a free flight to Cleveland on Southwest Airlines (I actually have the equivalent of about 6 free flights because of my Southwest credit card – let me tell you nothing gets women ready to get it on more than when at a bar or a club you pull out your Southwest Black Visa Card – yes girl, ever fly 5th class before?), but the catch was I had to fly out of BWI. Well I didn’t have to, but rather than fly from NYC to Chicago and then back to Cleveland I took Amtrak to BWI… at 4:40 am.  I arrived at BWI and went to the diner in Terminal A.  And they have (Trump voice) tremendous pancakes and hot chocolate (end Trump voice) for any travelers out there.  I then hopped on my flight and had leg room for days. See below: 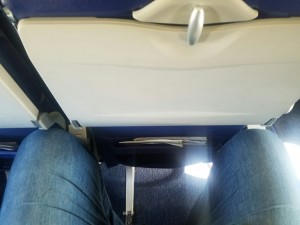 When I arrived in Cleveland I snapped a quick pic with Lebron James who met me at the airport to discuss some potential business ventures.  I then made my way to the comedy condo (usually words that are as awkward to a comedian as “Special Event: Jake the Snake Roberts”) but the Cleveland Improv condo is quite nice.  I then killed time and had a great set that night.  And to prove it I sold 1 CD, but got more compliments and eye contact than I have ever received in my 7 years of performing at the Cleveland Improv. 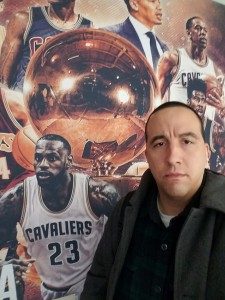 Friday – No Movie so Why Not Re-Write and Record a Bob Dylan song for 6 hours?!

Normally on Fridays I check out a movie and do a review and then emotionally wrestle for 5 hours on whether or not to go to the gym, but with no movie nearby (Black People Christmas, or whatever it is called was under 50% on Rotten Tomatoes so I couldn’t see it.  I was suspicious mainly because it was the first happy, mostly black movie that did not use Earth Wind and Fire’s September in the preview – I will not abide that disrespect to a proud black cinematic tradition.  So instead I decided that I should spend my day re-writing and recording a new rendition of Bob Dylan’s Hurricane for The Dan Lebatard Show on ESPN radio.  If you are a fan of the show it is strong work (even though my vocals are booty). I re-wrote it before lunch, went to the Rock n Roll Hall of Fame at lunch to see their new exhibit on music, power and freedom (really good and inadvertently timely) and then went back to the condo to record the song.  Hopefully it gets played and appreciated on the show Monday morning (writing this Sunday afternoon in a Starbucks):

That night I had some good sets and sold a whopping 4 albums so it was difficult to sleep that knowing that Saturday would be foot long sub at Subway instead of 6 inches due to my new wealth.  Here is a clip where I summarize the Republican Party in three awkward minutes:

Saturday – You Won’t Have J-L’s Merchandise Table To Kick Around Anymore!

The heading says it all. Had good shows, but after I sold zero on the first (helped in part by a group of 4 people who set up a human wall in front of my merch table – the pic below is of a woman doing the same thing on Friday night – but at least no one threw their coat on top of my CDs like in Albany earlier this year). So after selling zero on the first show I crushed the second show and then stormed out saying “You won’t have my merch table to kick around anymore!” and went back to the condo.  I then watched Dave Chappelle host SNL and give the best monologue in the show’s history in an episode every bit as good as Tom Hanks’s episode this year, which for me was the best episode of the show in years. 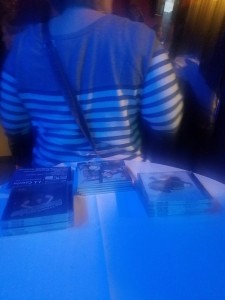 Good news is my CDs will rush for 100 yards with this kind of blocking...

On an Amazon Prime movie side note – earlier in the day I watched Woody Allen’s Bananas for the first time – wow – what a brilliant comedy that still holds up and is even prescient about some things (available for free with prime until November 30). I then watched (tried to) the very overrated Green Room – made it 65 minutes in and was bored. (Trump tweet voice) Sad! (End Trump tweet voice)

Sunday – Mass and TV in Starbucks

Walked to Mass on Sunday morning (huge, beautiful St John The Evangelist – oddly enough the name of my Church in Manhattan – I guess they franchised out) and couldn’t help feeling unholy thoughts as I looked at all those white, Catholic, Ohio voters (I know how half of my people tend to lean), but then I saw a girl texting during Mass and officially felt like a grumpy, old man.  But I do like being in a full Church and the fact that people still shake hands in Church in the Midwest instead of the Purell wave that you get in NYC.  I then watched Pitch and The Exorcist on my computer (seriously good shows on Fox this Fall – Mark Paul Gosselaar as a grizzled veteran catcher on Pitch is particularly good) and wrote a new version of My Prerogative called My Presidency for Trump (a joke that did so so was about how Trump is basically Scarface for white racists – expect his poster in redneck thug trailer parks in 15 years – and a political version of what Bobby Brown did when he left New Edition). I only mention this because I am starting to feel like comedy is more a compulsion, rather than a profession or even a hobby. Oh well, 500-5000 YouTube viewers will be thrilled when it goes up at some point and that is enough for me!

So one more show tonight and then my usual 5:50 am Amtrak back to NYC on Monday. You are welcome Cleveland.