Road Comedy Recap: Storming The States Near The Capitol 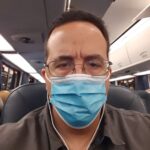 17 years ago I graduated from Georgetown Law and like the cicadas I just made a triumphant return to the DC area for 3 nights of shows.  It was a weekend of fancy Amtrak accommodations, reading on benches in shopping malls, heckles from plastic surgeons, hotel curtains that would not close, Cheesecake Factory, great comedy and a truly unique experience in my almost 18 year comedy saga: meeting fans. So without further adieu, here it is folks.

Thursday – Amtrak Luxury and a Fake News Summit in Arlington

Newark Penn Station is the closest Amtrak station to where I live, but it is also a disgusting place. So even though going to New York Penn would add time to my trip, I would also be able to luxuriate in the revamped Amtrak lounge in NY, one of the centerpieces of the new Moynihan Train Station.  As a Select Plus member of Amtrak (baller) I get access there for any Amtrak trip I take.  And it did not disappoint.  Unlike other Amtrak lounges on the east coast, rather than some Rold Gold pretzels and leftover Sara lee danishes, the new lounge has a full bar (well at least coffee bar), dozens of premium snacks and treats, beautiful, spacious seating and slaves fanning you. I ended up having a tea and two packs of Lorna Doones (I eat not for the job I have, but for the job that my great-grandfather wanted).

After I finished watching the complimentary gladiator matches in the lounge I made my way to my Accela to DC. I read 50 pages in Rick Perlstein’s Reaganland (leaving me with only 4200 pages left) on the way to DC and then took the Metro out to Tyson’s Corner, VA (which now looks like a whole new city) after arriving.  I checked into my Hilton hotel (as I told the crowds I like my hotels the way I like my sex tapes) and then made my way to O’Sullivan’s in Arlington for two shows.

Several fans showed up for both shows, but the true highlight (with no disrespect to my fans or the father of one of my college hoops teammates who showed up) was Jonathan Martin of the New York Times coming through for the first show.  Since most of our discussion was off the record I will not reveal all of the details of our hang out in between shows, but I will say this – everyone deserves to be loved the way Jonathan Martin loves my Mike Pence impression. Here is a brief transcript of a moment I will share.

J-Mart: You know Trump really did say to Pence “You can be a patriot or you can be a pussy.”

J-L (in Pence voice): Well Mr. President, I can assure you that the last thing I want to be anywhere near is a pussy.

J-L (in Pence voice): I won’t even go into seafood restaurants.

Friday was the type of day I had been missing for a year and a half. Walking around a new city, sitting around reading and just feeling relatively care free.  Of course the day began unexpectedly due to my hotel curtains.  There are two types of hotel curtains.  One type I call scissoring curtains – where you just try to bring together two separate sets of curtains to the middle and smush them together, in hopes of sealing them shut.  The other type are the “am I in there?” curtains – where you drag one curtain all the way across and try to seal it against the wall so no daylight seeps through. Well. at 7am, after 4 hours of sleep, I woke up thinking I had left a light on. In fact, the curtain had about 1/3 of an inch of daylight coming through, which was a sensation can only be described as “nuclear blast outside of my hotel window.”

Friday I ate at Shake Shack for lunch (their chicken sandwich is far superior to their overrated burgers) and read some more Reaganland (somehow I now have 4700 pages left – I think pages actually get added as you read it).  The mall Starbucks seating was closed so I had to drink my coffee and read my book just sitting outside of a random women’s clothing store, which after about 90 minutes, struck me as possibly creepy.  I then headed to Twinpanzee Brewery in Sterling, VA for the Friday show.  Unlike Thursdays shows, where I felt a tad rusty, the set Friday was great, which was good because my girlfriend’s friends all went to that show and there are only two things you don’t want your girlfriend’s friends to see you do on the road in this order: 2) making out with a sidepiece and 1) doing badly on stage.

Saturday I had lunch with my buddy Ross at the Cheesecake Factory.  Even though I could feel Type II diabetes forming in real time it still felt like the right fuel for the last two shows of the week.  Then it was time for the shows at Java Nation in Rockville.  I think the best way to share with you what went on is through bullet points (because I am tired and need to do other stuff):

Sunday – Back to NJ

The next day as I waited for my train back home I gave two homeless people $10 each (one did a double take and the other one tried to hug me (I kissed her with tongue since the CDC said I was safe). I was only going to give them $1 each but then I opened my wallet and $10s were the lowest denomination I had (baller) and once you open up the wallet it would take a real piece of shit to say “just kidding!” to some desperate folks.

So my first real road comedy trip in a year and a half was an incredibly satisfying experience. Thanks to everyone who came out and who helped organize the shows (Jon and Gil).  If you want to know where I will be each month, sign up for my monthly newsletter (bottom of my home page) and if you like me talking and joking about comedy life – be sure to follow Righteous Pk podcast (just click on podcast above).

And if you were wondering, Cookie was hanging out with her human cousins over the weekend loving life: