Road Comedy Recap: Do You Even Lyft on Juneteenth… 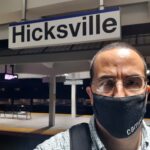 This weekend I celebrated Juneteenth in Levittown, Long Island, opening for the great Roy Wood Jr.  I feel like that sentence alone packs so much I could just end the blog there, but as a sign of progress Levittown did not move to another town once Roy and I arrived.  Any set of gigs in Long Island can be a pain for someone commuting from New Jersey  because you have to coordinate two different train systems. Door to door it is just as fast to fly to Denver as it is to go from Newark to Levittown via the NJ Transit-LIRR double trouble.  Rule of Thumb – if your commute consists entirely of populations that like to include “strong” as a description of, or moniker for their community, you are in for an inefficient commute.  Roy was gracious enough to ask me to open for him when we were both on the same bar show in April, so no amount of awful infrastructure was going to stop me from saying yes.  So here we go!

Friday: Only a Historic, Catastrophic Basketball Loss Could Ruin This Night!

On Friday, in honor of Juneteenth Observed, I went out early to see my friend Brian.  We had burgers at some well regarded burger stand in Massapequa, where the price of items had apparently been frozen since 1983.  Tasty and cheap, I picked up the tab, assuring Brian that thanks to my web cam girl side hustle I could cover our combined $1.14.

We then made our way to Governor’s Comedy Club.  Only one show on Friday and I crushed it. It was a good thing I did because a friend and colleague that I have not seen since March showed up with some friends and realized I was not just “I hate work, so the guy who sits near me is funny” level funny, but funny funny.  A recurring theme of my career for the last 6 years – fans of The Black Guy Who Tips showed up (to 2 of the 3 shows over the weekend, more for Roy than me, but still for me too) and my favorite type of fan also showed up Friday: The “I did not know you were going to be here, but I follow you and am a big fan” fans.  Once again, thank you social media algorithms for rendering my fan base a total crap shoot.

After selling a few USB cards (all 6 of stand up albums are on one USB card that I sell), Brian gave me a ride to the LIRR.  The 10:29 back to NY Penn would give me breathing room (i.e. Haagen Dazs kiosk milkshake drinking time) before the 1141pm train home.  When I exited the train in Penn the Utah Jazz, my favorite team for 34 years, was winning 72-50 at halftime, on the road.  My former doorman texted me a gif of Jordan Clarkson. My girlfriend texted me “jazzzzzzzzzz,” which meant the Jazz were either winning or falling asleep.  Then, like all things NJ transit touches, the Jazz game went to shit as soon as I got on NJ transit (but my doorman friend and girlfriend jinxing it deserves some blame as well).  By the time I exited the train 29 minutes later in Bloomfield, NJ the Jazz were up 2 points going into the 4th quarter.  I arrived home in time to see one of the worst quarters of basketball in franchise history and watch my team’s season end.  However, I felt a small sense of relief.  I had one less place to story my anxiety and stress so I ended up getting an above average 6.5 hours of sleep that night.  It also obscured the fact that Jazz legend John Stockton had recently come out as an an anti-covid vax type weirdo.  June 18th should just be known as Black Friday for the Jazz organization (which is also what most people in Utah call the movie Friday, to distinguish it from Joe Friday in Dragnet).

Saturday – Can a Half Black Man Catch a Cab in Long Island?

On Juneteenth I headed out to Long Island early because the NJ transit trains are every other hour in my town on the weekends. So I left Bloomfield and eventually arrived in Hicksville, Long Island (a 9 minute drive from the club) at 5:01pm.  I saw that there was a Chick Fil-A a ten minute walk away so I went for some Christian chicken before the show.  Once I was finished I figured I could kill time until 6:10 before getting a cab for the 7pm show.  Well, no Lyfts were available.  So I walked back to the train station which has an old school cabby depot. No cabs available. So as I began to feel nervous about not making it to the club on time (I don’t have Uber on my phone, but apparently they are easier to get on Long Island, presumably because people on Long Island think it is “gay” to spell Lyft with a Y.  So, after contacting the club and the emcee I was able to hop a ride with Roy when his train arrived at 6:55 and we arrived shortly before the show began, albeit beginning about 15 minutes late.  The early show Saturday was the only show I was not happy with my performance. It was fine, but the other two were a lot better.  I think part of it was the 240% humidity combined with the stress of rushing to the club had me sweating like Ron Burgundy when he is racing back to the news station in Anchorman.

After the show, in addition to more The Black Guy Who Tips fans, I was greeted by a couple that was quoting my Lincoln Project ads back to me. But they were not following me on social media, nor did they know I would be there.  More accidental fans!  But more hilarious, though out of respect for Roy I will be cryptic, was what went on between the shows.  Let’s just say I do not envy the part of Roy’s success that leads to potential Hustle and Flow encounters: 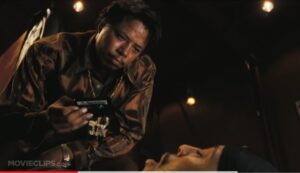 The second show went well (I am resisting my usual video posting this year because I really want a lot of my bits to be new for most people when I record in October) and then I rode to LIRR with Roy.  Here is where the story gets interesting.

Because of the weird train schedules, Roy offered me a hotel if I needed one.  I said I would take one Saturday so that I could stay until the end of the 2nd show and not worry about missing the last NJ train out of NY Penn.  But for some reason, most hotels in the vicinity of the club were all booked, so the best option was a hotel that looked nice to me on the web in Jamaica, Queens (PSA: the Internet is deceptive). Roy’s assistant booked it and I thanked her.  The good news, on top of the catfish hotel photos, is that it was a quick walk from LIRR in Jamaica, which would also facilitate a quick departure in the morning.  Here, in bullet point form, is the rest of my trip (you know I got home safe because this blog is being written Sunday night):

Fun weekend. Lots of reading on trains. Worked with one of the best in the business. And lived to write about it.