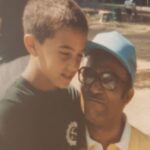 When I first started doing stand-up comedy I relied heavily on impressions (contrary to how many of you reading may have come to know me, impressions have largely been absent from my stand-act from 2007-present day). One impression I had (shocker) was Arnold Schwarzenegger. Schwarzenegger impressions belong with Trump, DeNiro and DMX in the “not this again” impressions hall of fame.  But I still had one and it was better than most.  One of the frustrating things about impressions if one like an Arnold or a Trump become so ubiquitous, it almost does not matter if yours is great, accurate, etc.  But I was new at stand up and had more voices than minutes of material.

One of my first bits that started doing really well for me in my first year in comedy in Washington D.C. (June 2003-June 2004) was an Arnold Schwarzenegger family reunion bit.  But due to the length of the name, the family had an abbreviation for members of the family: “negger.”  So Arnold would ask his son if he “wanted to be a big strong negger like his Dad or a lazy ass negger like Uncle Frank.”  The bit almost always did really well because the impression was good and the concept was a little risque (like callbacks, being a little “naughty” is easy points with a comedy club audience). In fact, when Dave Chappelle debuted “The Niggar Family” sketch on Chappelle’s Show several months after I had been doing the bit around DC, three different comedians texted me their condolences, not because they thought it was stolen but because my station in comedy would make me look like a copycat if I ever did the bit again.

Now this is not totally a story about how even 17 years ago our comedy tastes were so much broader and less sensitive than they are today, though that is somewhat true (real comedy fans are no more sensitive, but the broader swath of society that consumes comedy through cell phones and the Internet is surely much larger and as I repeatedly say, if you are going to take the increased wealth that can come from increased exposure you need to accept some of the broader taste and sensitivity that come with it).  The reason that the negger family also worked (and why this is not just a PC sucks screed) is because I built disclaimers about my racial background into my material.  I had a bit in the beginning of every set where I planned to do “Negger Family Reunion” about being half Black.  Therefore I had offered my proof of membership in the club where I could take more liberties with racially sensitive material.  I was not saying the N word, but I was dancing on a line gleefully and realized that given my face and the city of my comedy birth, Washington D.C., I needed to offer some bona fides.

Several years later in my career, long after I had relegated my impressions to YouTube sketches and begun developing lots of stuff to say on stage in my own voice, I would encounter a different issue.  Often when I spoke on racial issues, or made jokes about race I would make some audience members (not limited to one race of gender) uncomfortable if I did not offer my racial bona fides early on.  To say nothing of white guys wanting to discuss my dick after shows or Black women (on much rarer occasions) wanting body hair proof of my half-Blackness, it seemed that I had to offer proof of my Blackness to joke about race. However, even after offering my biography and ethnicity CV in joke form, more frequently than I like, I am still not afforded basic respect for who I am.  It is a small percentage of audience members, but it happens at most shows (perhaps being more well known will reduce awkward skepticism, but then it will just be transferred to the next Rashida Jones looking comedian down the road so that doesn’t really spell comedy progress)  So as my comedy became more centered on my thoughts and experiences in life I became much more hostile to proving anything.  The Schwarzenegger joke is really the only time, other than one bit on my first album, where I ever uttered something close to the N word in life or on stage.  So I felt like I was not taking any liberties that a comedian should not be entitled to, let alone one with a Black father.  And as my friend Josh Homer commented one night many years ago (and on a few social media posts during the years), if a crowd did not respect my jokes on their own merits, I would often not bail them out with an “hey folks, it’s ok – I am half-Black” permission slip to enjoy the material they were already anxious about.

Without divulging anything beyond the title, my next album (or hopefully first special) is tentatively called Half Black Face.  We are in this annoying time in comedy where so many of the free speech warriors in comedy veer into “offensive bigots just using comedy as a shield to protect indecency” and people who are so concerned with policing comedy appear to be people who don’t seem to either enjoy comedy or know anything about it.  So if you want to be a decent person with free reign to be somewhat indecent in an art that is built partly on indecency then your creative space feels like it is shrinking.  But what annoys me on a personal level is that too many people want to judge me by rules that I don’t think should apply to any comedians, but still have force because they are about “protecting” certain groups of people.

Over the last year I have picked up an exponentially larger following than I have ever had in my career and I am grateful for it.  But I have also had too many “fans” (often, but not exclusively white progressives) inform me that because I am white (to their eyes… and let’s be honest for half of the year almost all eyes) my comedy did not hit as hard as someone who is not ostensibly white.  While people fawn over clapter comedy or the latest Pet Rock of humor, I found myself forced to defend my material as both original and valid, despite appearing to come from a white person.

Beyond that I have been lectured about my own jokes.  One joke I wrote said that London Breed, Keisha Lance Bottoms and Lori Lightfoot (all Black women mayors who were appearing jointly during Covid news appearances) sounded like the names of superheroes or porn stars.  Multiple people informed me that mocking Black women names was problematic.  I am fairly certain if I looked Black I would not have been lectured by a white progressive (because then they would likely view that as “violence towards me”) but I also believed the joke stood on its own, like I feel about most jokes.  Other than “Keisha” there is nothing about those three names that screams “Black woman.”  Follow that with me making a joke about Timothy Chalamet and JB Smoove looking like Jon Ossoff and Raphael Warnock and someone calling it racist (mind you, the Ossoff doppelganger was not racist, just the Warnock doppelganger). And then this morning, a joke I made a few months ago about Cornel West looking like an old Don Lemon (the joke was about the verbosity of West, not their appearances being similar, and was promptly met with some progressives denouncing my terrible comedy). 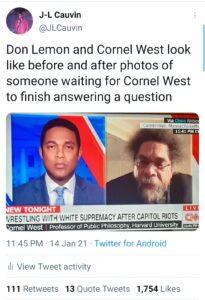 I am of the opinion that offensive comedians should be allowed more space because like speech in general, it is the ugly stuff that needs to be protected.  No one is required to laugh, but condemning jokes seems to be happening too often, especially from people who don’t seem to know or enjoy most comedy.  I am not a jazz fan (musically, we all know I love the basketball team) so I won’t buy tickets to a jazz concert, but I would never deign to lecture someone on what good jazz is or what jazz they should support.  But everyone appears to want to be funny or be seen as having a great sense of humor, which seems to be the only qualification for dictating the terms and taste of comedy.  This would not annoy me as much as it does (though it would annoy me), but for the racial angle, which I take personally.  Some folks seem to think that even including a Black person in a joke as a white (looking) person is off limits.

It reminds me of the time a nice fan complimented me after a show, but told me I should stay away from jokes about trans people (the joke had been about wanting more diversity among serial killers – all the docs were about white killers, but what about women, POC and trans serial killers – the joke was literally about diversity, not attacking trans people, but the new wave of comedy fans truly seem to be triggered by words before they even interpret the context). That would be bad enough, but that sensitivity is coupled with an outspoken boldness. So in many cases you have people too sensitive to enjoy or understand comedy, but simultaneously emboldened enough to condemn it. This particular fan was nice and almost inquisitive so it was not a time for an argument but just an exchange of words, but many people come much more forcefully, despite being equally ignorant.

So when it comes to my own material I want to remain uncompromising, though I do believe I have probably missed out on some opportunities during my recent run because I am a comedian and not an actor or PR creation cosplaying as a comedian.  I don’t need people to know my race and would prefer audiences that embrace the quality of my comedy on its merits without needing a demographic cosign.  I am not comfortable being a spokesperson or representing something other than a true stand up comedian. That is because I am honest about my experiences in life. When I visited Ireland as a child many kids asked if I was North African. But as I grew older many people thought I was Italian, Jewish or occasionally Egyptian. I understand I have had in some ways the whitest (or at least lightest) of privilege – being a large, angry looking beige guy has not drawn the scrutiny that someone my size and disposition might have gotten if I had a different role of the genetic lottery between my parents. I respect that experience when compared to other POC, but it doesn’t fully strip me of my identity and my right to be who I am without having to constantly prove it.

I still think Billy Crystal’s Sammy Davis Jr is a great impression that poses no problem.  Can I say this as a half-Black man who looks white or non-Black to most people?  Who determines if I can say or feel that way?  I am not trying to speak for others, but is my opinion not at least somewhat valid?  I would love to live in a world where all jokes are ok if they are truly meant as jokes, but for every 50 audience members that are triggered, there is a comedian who probably uses comedy more as a weapon to vent hate than to explore ideas.  But I think we need to protect that person as comedians and comedy fans, even if we don’t like it.  But I don’t want to have to protect my own audiences from jokes anymore.