I was a last minute addition to a gig on Saturday and just the way I got it was illuminating in terms of how different generations and experience levels of comics can perceive road work. The gig was a paying gig, with transportation and a hotel room. This is what is known in road comedy as, “The Holy Trinity” or more accurately, “Whoa, did I get a time machine back to 1990?”  I was asked a week before the gig, which was to take place at Willow Creek Winery, in Cape May, NJ, by the young comic booking it who seemed apologetic for the relatively last minute notice.  See, he is approaching comedy like Bernie Sanders approaching a 19 year old black college student at Berkeley, who has a different world view on The Struggle. What he didn’t realize is that my career has felt much more like the experience of John Lewis (not just because of our similar names), except my comedy career has endured more pain and struggle than his work during the Civil Rights Movement. So in my mind, when I hear money… and a ride… and a hotel room, I don’t need to concern myself with anything else about the gig. Hell, I might have ditched a gig for this gig. But fortunately he caught me on one of my 361 nights a year when I am not booked. #Blessed

We all (Sam (the young comic/booker), his girlfriend (not a comedian) and Anthony DeVito (funny comedian) met in Hoboken around 1:30 on Saturday and made our way to Cape May in Sam’s car.  The drive was very fun and pleasant, though I realized I have the tendency like a dog that has been crate trained (my studio apartment being my human crate) to thoroughly/overly enjoy interaction with comedians when no longer solitary. I think if you asked comedians their opinion of me it would be “asshole” from (mostly) people who have never met me and “pretty cool, but holy sh*t does he talk” from people who have worked with me.  So at least I enjoyed the ride down to Cape May and then we arrived at the Southern Mansion.

Southern Mansion is the hotel where Anthony and I would be staying. Below is a picture of the bed situation, with Anthony doing some pre-show reading.  The Southern mansion looks and feels like somewhere Leonardo Dicaprio would have lived in Django Unchained and the living situation illustrated that. I had wished the bed situation was a little more equitable, but since I could not physically lie down on the small bed/lounge I got the humungous, gay Asian bed. 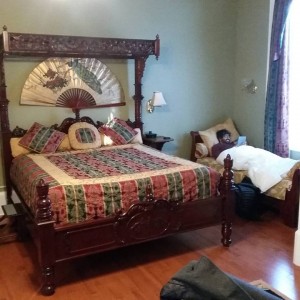 When we got to the show it was a beautiful event space full of elderly white people.  We got fed a nice dinner and drank free wine at which point I wondered if we were just being feted before we were ritualistically sacrificed. That is how un-road comedy this gig felt.  But then the show started and the crowd was great. Chrissie, the 4th comedian on the show, who drove up separately with her boyfriend, went up after Sam emceed. She did very well and set a dirty tone for the show. Like a comedian canary in an old, white people coal mine she let Anthony and I see that we would not have to operate on a perfectly clean level.  Anthony then went up and did well, especially when the microphone broke for 10 minutes (NOW it is feeling like a road gig!) and then it was time for me.

Before I went up Sam mentioned that Willow Creek Winery is the best winery in all of New Jersey. So in an effort to dig myself a hole, I announced that this gig was a perfect compliment for my bucket list because I had just performed at the best Olive Garden in Paris.  But it got some polite chuckles and the set went well. It was a weird feeling when I did my Election year run through of Trump-Sanders-Obama impressions realizing that this crowd of old white people did not seem to like Trump, Chris Christie, Bernie Sanders or Hillary Clinton (maybe a Jeb Bush crowd?). And in the middle of one bit about Spirit Airlines one woman yelled at me “They don’t support the troops!” which I thought an odd policy for an airline.  But they were a nice crowd and laughed a lot despite being drunk and understandably tired (hour long dinner before a 110 minute comedy show).  We then went to a bar nearby that had possible the best chicken fingers and fries I had ever had.

The next morning Anthony and I went to brunch looking like a closeted couple of gay men on a secret getaway from our heteronormative fake lives in NYC. There was a nice continental spread, as well as on the house a la carte service to choose from (omelets, pancakes or French toast). After eating, but before departing, we got a nice compliment from a woman who was at the show and then some guy asked me to “do Bernie Sanders at brunch”… before telling me “last night was pretty good.” As I have said, pretty is the ugliest word in comedy, but when a gruff white dude with a mustache tells you any kind of compliment you have to realize that anything more than “pretty good” and his VFW buddies might accuse him of being queer, so I will take the compliment in the spirit in which it was intended.

We had an uneventful drive back to NJ and then caught a PATH and a Subway train right away, which is pretty crazy on a Sunday. So, without being hyperbolic, this might have been one of the best gigs I have ever had in my entire career when taking into account free perks, crowd, pay and overall comfort from start to finish.  And it might even still make the top 10 if I had a comedy career that wasn’t on life support!