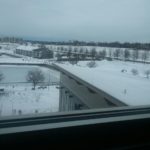 This weekend found me in Syracuse, NY (always good when the road forces you to miss the jacked up prices of Valentine’s Day and just celebrate on Sidepiece Day (February 13) for more reasonable prices and easier to obtain reservations) entertaining the people of upstate New York from the confines of one of America’s largest malls.  The weekend would include movies, cheesecake, PF Chang’s, looking like a domestic terrorist in the mall and a visit from the former Governor of NY.  But most of all it would include me setting a new high in missed references by audience members, cementing my status as the beige, left-of-center Dennis Miller.  But as they say –  in the land of the blind, the one eyed man is king, so please don’t perceive this as me unnecessarily taxing the minds of America.   When I ask a sold out crowd how many know who Quincy Jones is and only 15% clap (5% less than for his semi-famous daughter) you just start to feel like either you are out of touch or people are getting really dumb, OKAY BABE cha cha cha.  So without further adieu, from my writing room aboard another Amtrak, here’s the recap:

After arriving at the Destiny Mall (where, based on all the neck tattoos I saw, the destiny is apparently unemployment) I went to PF Chang’s, despite my agreement with The Cheesecake Factory to brown bread and cheesecake myself to death every time there is one nearby.  I ate my beef & broccoli and then went to the club. Was predictably pretty packed for the V-Day.  My walk up music is “Warning” by Biggie, simply because it has a great opening 15 seconds before lyrics start.  However, I have made the mistake over the last few road gigs of thinking that Biggie is sort of culturally ubiquitous.  Well… he isn’t.  Actually  – let me cut to the chase. Here is a list of all pop culture references I made in my 5 sets and the corresponding level of acknowledgement by the crowd:

Most of my act is not references or analogies, but every year it feels like there are fewer and fewer consensus references (HOW THE FU*K DO YOU NOT KNOW QUINCY JONES??!!!*^@E@&@*), but even A Star Is Born jokes were falling on deaf ears a couple of weeks ago in Buffalo – the movie was a huge hit and nominated for 8 Oscars but you feel like you are mentioning a 1960s foreign film to half of these people!

Well the show went well enough – sold a lot of albums after the show and then celebrated a solitary Valentine’s Day as one should – by banging a piece of red velvet cheesecake from the Cheesecake Factory (which may be the title of my next album – an R Kelly parody record – DEAR SYRACUSE R KELLY IS A SUCCESSFUL SINGER WHO IS ACCUSSED OF HEINOUS CRIMES AGAINST WOMEN AND GIRLS AND HE HAD A HUGE ALBUM CALLED THE CHOCOLATE FACTORY).

On Friday I left the hotel around 1130 for the Destiny Mall. I went to see the new Liam Neeson movie (if you like the 2nd season of Fargo and don’t mind that Liam Neeson once roamed the streets looking for black men to murder it is actually one of his best movies of recent vintage.  I also thought of a sketch – Liam Neeson shooting scenes for Schindler’s List and then during breaks in filming scouting places to hunt black men. Example:

Liam as Oskar Schindler:  We must give these people freedom! We must protect these people!

Liam Neeson: I am going to get those black bastards

Director: And can we take it from that later line one time actually

LN: Sure.  These are people. Good people. And we cannot judge them based on what they look like or how they worship!

Director (tearing up): And cut! Wow – that was beautiful.

LN: Now. Where’s the best place to find a black bastard. I mean anyone with black skin. Doesn’t matter!

You get the point.

I then sat in various places in the Mall for an addition 5 hours, basically looking like I was scouting it for a terror attack, reading a book on Frederick Douglass (one of my fellow bi-racial Mt Rushmore Americans – Babe Ruth and Barack Obama are the other two).

The two shows went well in that I sold a lot of albums, but the crowds still felt weird.

I woke up early on Saturday for no reason other than that Mother Nature apparently wants to accentuate my already sleepy eyes. I went to the Mall around 11 and went to see the first show of Happy Death Day 2U (the first one was surprisingly good; it stars a pretty chick who plays bitch really well and there’s like 1% of my DNA that still finds that attractive), but the sequel, though mildly enjoyable lacked some of the focus and bite of the first one.  I am supposed to see Alita tonight, but right now the best movie of the weekend is definitely the one starring the guy who hunted black people for sport back in the day.

I then spent another 5 hours sitting in the mall, had PF Chang’s for dinner again, read more about Freddy D and then went to the club to see a packed house for the first show. And they finally were the crowd I was hoping for. Still sort of dumb, but a great energy for comedy. Sold a bunch of albums and then got a piece of cheesecake from the Factory (Oreo – my arch nemesis and eventual cause of death).

The late show Saturday felt like it was “Bring Your Stripper To Work” Day. There were a lot of big heels and bigger, round breasts on display when the show was over (they were an OK crowd – pretty much like all of them except the Saturday early show) and as the audience was leaving a lot of the couples looked the same: White Guy with Suit (there was one black guy who looked like he was taking his stripper out for a date), earring and/or hair gel, and a woman who looked like she was in Jay Z’s Big Pimpin’ video but has now settled down in Syracuse to raise her family of breast implants in a conservative community.  To be honest is a smart move by a small market thot – if you go to LA you will look like a middle class housewife with a web cam show; if you go to Miami you will look like a grandmother with a web cam show, if you go to NYC you will look slightly trashy (though you are appreciated boo!) but in Syracuse you look like a porn queen who can have any Syracuse University assistant coach you choose! I call these women Giannis Antetoko-bimbos (SYRACUSE – GIANNIS ANTETOKOUNMPO IS AN MVP CANDIDATE IN THE NBA AND PLAYS IN MILWAUKEE SO IT IS A PUN ON HIS NAME AND ALSO AN ANALOGY TO HOW HE HAS THRIVED IN A SMALL MARKET). But even more notable on the final show of the week than the abundance of saline was the presence of former NY Governor David Patterson. I killed with him and his family. They came over after the show to tell me that I belong on SNL. But then they left without buying my album. You just can’t trust politicians!