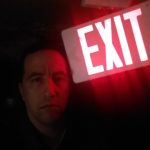 This weekend I travelled to Washington, DC to perform with Jay Nog (my co-host on Making Podcasts Great Again) and John Moses (of Fight Stories Podcast) at Bier Baron Tavern – a bar/hotel/performance space in the heart of Dupont Circle (sandwiched between a Church with a huge rainbow flag and a gay bar called The Fireside – a real Devil’s Triangle!). We had two stand up shows, Friday at 8pm and Saturday at 8pm and then at 10pm each of those nights were Jay’s show called “Paid or Pain” where veteran comics sit and judge new comics and then based on audience reaction the new comics are either paid for their sets or tortured by a dominatrix.  This of course differs from my comedy career where I am paid, but never enough to cover the emotional pain of pursuing stand up comedy as a career.  Now federal workers in the DC area are largely furloughed from work and going without pay.  And as the shows demonstrated this weekend, we ended up wishing the fight over Trump’s historically terrible presidency had forced us to be cancelled as well.  So without further adieu:

When I arrived at Bier Baron Tavern I realized I had stayed there before.  I believe it was 2013-ish when I emceed for Sebastian Maniscalco and needed a cheap hotel to guarantee myself some profit for the trip.  Ironically enough this weekend I stayed there again, a mere one week away from taking my girlfriend to see Maniscalco at Madison Square Garden.  I guess I am just keeping it more real. When we checked in there was a guy standing in the lobby in a drug-induced trance. He was outside in the same mode the next day. But even he was gone on the third day when he realized no one, including dealers, wanted to be near these comedy shows. 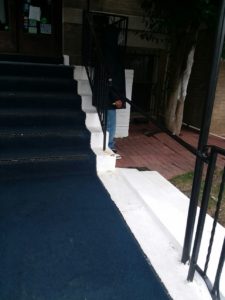 After checking in I had a salad at Chopt nearby and went over my set list for the night.  When I made my way down a few minutes before showtime I noticed that there were 6 people in the room.  But to be fair a woman came in about 10 minutes into the show to drive attendance to 7.  The crowd was pleasant despite being so small, but I could not help being disappointed. You see across the street from the venue is a coffee shop named SoHo Tea & Coffee.  And when I started doing comedy in DC in the Summer of 2003, STC had one of the best booked shows in the city. Monday nights – always a full house, good comics, etc.  And the few times I got to do it before leaving DC for NYC (for my first attorney job) were really enjoyable and felt like little early career milestones (i.e. not performing on comics-only open mics, though to be fair a lot of mics in DC had audience).  So in 15 years I managed to make it across the street for a few hundred dollars in net profit.  Not good. 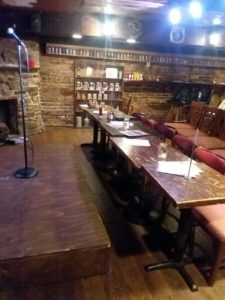 This was taken 2 minutes before Friday’s stand up show.

After the stand up show we got ready for Paid or Pain and that was a packed house as the young DC comedians packed the place with friends.  Some of the comics were decent for newbies, some were atrocious.  But one guy stood out.  And not in a good way. In comedy there is no more offensive combination than confident and terrible.  And one comic basically got up there and delivered a worst of Def Comedy Jam performance.  I mean the hackiest white people this/black people that comedy. As one of my fellow judges Reese Waters said “That act killed in 1988.” John Moses, who was equally vicious (and correct) throughout  the night and basically deduced that the guy had so much confidence because he had basically lifted the act from old Def Jam.  The worst part was how well he was killing with the crowd. Between his friends who accused the three of us as “not knowing comedy” and “being jealous” and several other audience members who were so drunk and possibly stupid you would have thought Patrice O’Neal had risen from the dead to deliver his new special.  And because I never pass up a chance to reflect on comedy I realized these people are probably typical of comedy consumers now: Meme consumers who watch 2-4 Netflix specials a year, never go to a comedy club and think real hackery (like the jokes went stale in 1994) is great comedy.  And when I am featuring for that guy in 6 years I will have a good, sadistic laugh.

On Saturday I woke up early to do all my comedy logistics for the week and then recorded this week’s episode of Making Podcasts Great Again with John as our guest (it’s a good one – so go subscribe on iTunes and enjoy when the new one drops on Wednesday).

I then went to see The Upside – the new Kevin Hart and Bryan Cranston movie.  I will say the movie is a high B+. I enjoyed it, I laughed and most notably, I had no idea how the movie was getting demolished on Rotten Tomatoes.  I have suggested this on social media with the movie Bumblebee, which sucked, that Rotten Tomatoes is susceptible to bribery or at least bias.  While a F/1 star review is clearly rotten and an A/4 star review is clearly fresh in that 2-3 star range there is a lot of discretion in how they categorize it as rotten or fresh, since most people in our App/Quick fix/low attention span world will likely just see its score as the indicator that matters.  For example, when Lady Ghostbusters, an awful comedy received a strong score I decided to look closer and saw a lot of 2.5 star reviews where the blurb was fairly negative but was being rated fresh.  Just something to think about when you realize how much power RT has in this day and age and how much money is invested in movies.  It would be business malpractice NOT to try and manipulate or bribe Rotten Tomatoes.  But the point is simple – I really enjoyed The Upside.

When I left the movie theater I had to eat an early dinner and was not sure where to eat. And then I exited the Mazza Gallery shopping mall and realized that God had a plan: 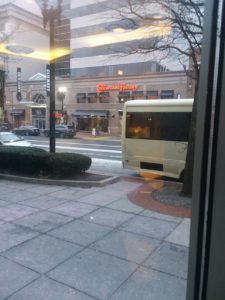 The shows that night were not good.  Snow had started falling so if you needed an added ingredient to ensure poor attendance beyond three comedians of varying levels of anonymity you had it with snowfall in DC, a city that handles snowfall about as well as Trump handles polysyllabic words.  The first show (the stand up) had about 10 people in attendance and they were very nice and eventually warmed up with about 20 minutes left in the entire show.  But the real deal was the Paid or Pain show where the comedians were almost all new, but all displayed varying levels of competency (the last one is probably ready to emcee some places, as he was the best and most experienced of all of them). But instead of 2 or 3 getting voted for Pain, the audience, which seemed to not grasp sarcasm, comedy or the fact that the voice judging the comedians was not, in fact, Donald Trump, but just a comedian imitating him, voted for everyone to get money.  At one point I called them a collection of Care Bears with brain damage, a group with a Teri Schiavo-esque grasp of comedy and various other well done insults that seemed to go over their heads.  At the end of the show I spoke to them in my real voice to prove to them that I was not Trump (even though I was completely visible on stage the entire time) and that got a big laugh as if they just realized it.

I had an 850am train home and the snow was still falling and I contemplated taking a Lyft, but I instead walked to the Metro, which opens at 8am on Sundays. DEAR WASHINGTON, DC – YOU ARE A MAJOR CITY OF NATIONAL AND INTERNATIONAL IMPORTANCE! STOP ACTING LIKE SOME SMALL SOUTHERN TOWN – OPEN YOUR TRAIN AT 6AM IF YOU ARENT GOING TO BE 24 HOURS A DAY! When I got to the Metro the gate was still locked. But the next train would not arrive until 833am – a very close call.  I contemplated going back to the snowy surface of Dupont Circle, but the up escalator was not turned on and I was not prepared for Rocky IV mountain training at that hour (seriously – DC folk know that escalator is like travelling into coal mine depths). So I waited until someone opened the gate and got on the Metro (5 stops from Union Station).

I got to Union Station at 842am and began sprinting screaming “Allah Au Akbar!” to make sure I had a clear path to the train (it was like my own Tom Cruise movie for 30 seconds).  I got on at 8:47am and plopped down in the quiet car, breathed 200 out of shape sighs of relief and thought to myself, “What the fu*k am I doing with my life?” I then cracked open the latest book on climate change that I am reading, The Waters Will Rise, and took comfort in knowing that we are all fu*ked.