Road Comedy Recap: A Tale of One Twin City

This weekend I was in St. Paul, Minnesota at the Joke Joint Comedy Club headlining (one of three headlining engagements I have this month, so apparently Hell has frozen over).  It was a great weekend, but emblematic of the struggles of being a (supremely talented) struggling comedian trying to make it to the next level.  For instance, I did not draw particularly well because… the weather was really nice.  To be fair I did have a fan from The Adam Carolla Show show up as well as a fan from The Black Guy Who Tips, but the crowds were the smallest I have had in my 4 headlining appearances at the Joke Joint (and this after adding more credits and picking up more fans from around the country).  It is always a sad measure of your stature as a comedian when “seasonably warm weather” is a deterrent to coming to your comedy show.  Admittedly the weather was great and the feature (whose name is Dan Mogal – #ComedyMogul meeting #ComedyMogal – we could not shake hands because it might have ripped the fabric of space) informed me that it was also some big fishing weekend in the Twin Cities.  So I guess I lost to sunshine and Nemo this weekend, which didn’t really soothe my wounded pride.  Since I am in an hurry to get to my day job (#ComedyMogul) I will give you the highlights and three very instructive videos from the weekend. Enjoy!

The first show of the weekend was lightly attended.  But they had the energy of zero people so they definitely had their apathy working overtime.  I was happy with my set, but the crowd, which was full of smiling mutes did not produce the usual amount of laughter indicating pleasure with jokes.  However, the feature’s Dad was at the show (#FatherMogal) and after a bit on social media he let out the loudest noise of the night, not coming from the microphone, when he sighed “Jesus Christ.”  Needless to say I sold zero CDs after the show and just went back to my Best Western Plus and cried into a glass of milk while emotionally devouring a pack of Hostess donuts (very underrated donuts).  But then I stared into my mirror and recited my mantra, borrowed from Antwone Fisher, a film about a man finding inner strength dealing with childhood traumas of sexual abuse.  Since that felt about the same as what I had received from Thursday’s crowd I stood there saying “I’m still standing… I’m still strong!”  I then made a 7 minute montage of Thursday’s crowd silently rejecting every popular culture reference I made during my set.  It was very popular on Facebook and now you can see it on YouTube. Enjoy!

The Friday crowds were great.  Sold some CDs, picked up some social media followers, and I developed a technique that I am patenting for comedy called “Divide and Conquer” (TM).  I basically trashed Thursday’s crowd repeatedly at the end of well received jokes and the Friday (and eventually Saturday) crowds luxuriated in their feeling of superiority over their fellow town folk. I felt so good that the Friday crowds had redeemed me that I put together a compilation video of the same jokes killing (mostly) on Friday, that had failed Thursday.  It was only 25% as viewed and likes on Facebook as the one of me crashing and burning because people are terrible and only like to see me in pain. If you are a decent person (Divide and Conquer (TM)) then maybe you will enjoy this YouTube clip of the jokes working:

Saturday: Praise the Lord and Pass the Comedic Ammunition 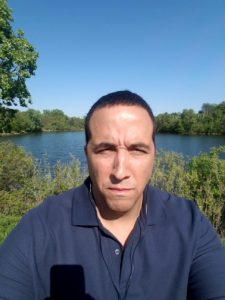 I was the only one not smiling about the great weather in St Paul. This is one of the 10,000 lakes I assume.

Saturday was the best day of the weekend. The weather was beautiful (again) so I decided to walk to Church (Saturday evening Vigil Mass) , which was 1.8 miles away according to GPS.  The priest was a visiting priest who has been doing missionary work, which, as he described, started on a trip to Haiti, which got me a little teary given the recent burial of my father in Haiti (but all the white people were like “This Italian dude is soft AF!”), but don’t worry – most of my thoughts during Church were still comedy-centered.  Rather than bore you with more words (Church rock band, 1 black guy in the whole Church…) – here is my summary of Midwest Catholic Mass from the Joke Joint stage that night:

That night the shows were outstanding – and just so the late show Saturday people know I meant it – you were the best crowd (but all the Friday and Saturday crowds were really good).  Sold more CDs and ended the night with an ice cream because I was a good boy who had done a good job. And my favorite compliment of the week that showed what a hypocritical laugh whore I am came after the early show Saturday.  A Trump voter came up to me and said “I voted for Trump, but unlike some comedians, everyone could laugh at your Trump impression and material (GOAT).”  Instead of lying down in front of his car screaming “Free the nipple” while wearing a Black Lives Matter t-shirt, I just shook his hand and with a goofy grin said “Thanks so much!”  The only difference between a comedian and a politician is that a politician only sells his soul and integrity for money and power, while a comedian will give it away for a handshake and a kind word.  Oh well, anything was better than those Thursday people.