Kevin Durant May Have Killed The NBA

Celebrating my 30th year as a Utah Jazz fan in 2017 (in exile in NYC for the whole time, like a hoops Roman Polanski) I began the 2016-17 season with deferred optimism. Last year (2015-16) the Jazz would have made the playoffs if they had not been the most injured team in the league. This year they had a contract year Gordon Hayward, an ever-improving Rudy Gobert and veteran additions of George Hill and Joe Johnson, so it was not hard to convince me that this was the year they finally became relevant again. They won 51 games, despite losing the most starters’ games to injury in the league.  They have a young core, a rabid fan base and a series win over the Clippers to give most of their players a first taste of playoff success.  And as of last night’s bitter defeat in Game 3 of the second round hope has been snuffed out. And it may have been snuffed out for the rest of the NBA for some time.

I think I learned that I hated Durant for the first time last night.  I thought his decision to sign with Golden State was weak and anti-competitive (you get to an NBA Finals at 23, take the defending champs to 7 games – after BLOWING a series lead – and you decide to join your vanquisher instead of staying put?), but I did not really care that much.  I was more focused on the development of Utah and figured we would not be championship ready for a couple of seasons anyway.  But seeing the Jazz, who I think could have easily been the 3 seed this year if they had merely suffered the league average for injuries, make such strides so quickly made me feel more helpless as a fan much sooner than I expected. 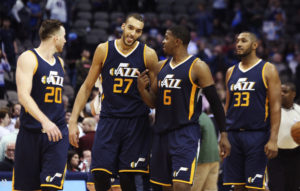 The Jazz have built a team slowly and surely that could be a conten- oh never mind.

And before I continue destroying Durant, I think some of the blame for his decision rests with the fans and the media in our age of easy markers of success and low attention span.  As a Jazz fan, and a 90s hoops fan of any good team without Michael Jordan on the roster, I felt many stinging defeats, but in retrospect I am happy to have rooted for a team that was competitive for 2 decades and elite for 4 or 5 years.  Malone and Stockton are among the game’s greatest players and losing to Jordan did not tear them down as much as it enhanced the legend of Jordan’s greatness.  However, with social media, the Internet and stupidity all playing a bigger role in our lives, the scrutiny and need for an easy token of “greatness” dominates sports’ conversations.  So after Lebron was crushed, but then redeemed for winning, by a fickle and hypocritical fan base, Durant probably looked and said “The only way for me to be legit is to win a title and the media and fans will forgive my cowardice if I win, just like they did for Lebron.”  Of course, there are critical differences (Lebron joined a 47 win team and had been in a purgatory of Cleveland – never bad enough with Lebron for elite draft picks, never enticing enough for free agents. He did not join one of the 5 greatest teams in NBA history that had just barely beat him), but I cannot say that fans and media are completely blameless in creating the atmosphere that made Durant choose Golden State.  But that said, his move to Golden State was the most cowardly and bloody coup since the Red Wedding on Game of Thrones (there will be more GOT analogies). 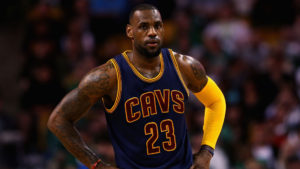 The Decision now looks like storming the beaches of Normandy compared to Durant’s gutless decision to play for the Warriors.

I’ll admit I was deeply frustrated that my Jazz squad had nullified Curry, Thompson (FYI – the only non-bitch superstar on the Warriors) and Draymond to bad games and the Warriors were able to rely on the Johnny Gil of their Shitty New Edition to drop 38 points.  But seeing Durant try to be a tough guy, a villain and an “assassin” has made me (I never thought I would say this) miss Kobe Bryant – who may have been a douche and a jerk, but never an anti-competitive turd.  Watching Durant emotionally flex felt like seeing Amazon do a touchdown dance in front of a neighborhood bookstore that was closing.

So is there any hope? Probably not.  I mean maybe Klay Thompson could leave and maybe the overall bitch-ass-ness of the team would force it to implode, but other than that I think we may be stuck with this squad for a while.  But if there are any chances for the rest of the league here they are (with a slight Utah bias showing on one):

Lebron.  Lebron may be the Jamie Lannister of the NBA at this point (how ironic that the King is best represented by the King Slayer).  The Decision was when he pushed a kid out of the window (boooo), but he then helped a giant, unappealing woman (Brienne of Tarth = Cleveland) and we all were fans again (yay).  Well with Durant and GS being Cersei and The Mountain (a bitch and a powerful monster tandem) it may be the King Slayer who will provide us the best chance to prevent a terrible dynasty.  And, by the way, if Lebron actually does beat this Warriors team in the Finals, I (clap emoji) DONT (clap emoji) CARE (clap emoji) ABOUT (clap emoji) MICHAEL (clap emoji) JORDAN’S (clap emoji) SIX (clap emoji) RINGS!  The GOAT title will have passed and I will not longer entertain other arguments… even when it is revealed that Lebron uses HGH for milk in his cereal.

Lebron and Cleveland… GoT style

Chris Paul to the Spurs (or if not, the Jazz).  Gregg Popovich is the only superstar in the NBA besides Lebron with a shot to stop the Warriors.  And getting Chris Paul would greatly enhance their competitiveness for the next few years while Paul can still deliver (he was outstanding against the Jazz).  The Spurs are the Patriots of the NBA, except their leaders don’t like Trump, so they are even better.  With Chris Paul taking over for Tony Parker they would immediately be a legit contender again, especially if Apple updates the Kawhi Leonard operating system for 2017-18.  But if the Spurs cannot get him I would argue that the Jazz could make a compelling argument.  They have a great defense, depth at each position (except center – maybe address that in this Summer’s draft) and with George Hill injury prone and not under contract a possible place for major upgrade. And only a few teams are better than the Jazz and almost all have the pG position filled – GSW, Cleveland, Houston (Harden), Spurs, Jazz.  So basically if the Spurs cannot get Paul I think it would be beneficial to the league, to CP3, the Jazz and my mental health for the Jazz to make a deal for CP3. The pitch the Jazz make is simple – “Right now Chris, you are in the Stockton, Payton, Nash category and unless you get a title you will never break into the Isaiah Thomas category.  We are your best (non-Spurs) shot at that. So what if Utah is boring – it is beautiful and we only want you for 3 years.”

JaVale McGee accidentally injures all the Warriors. Perhaps an athletic move gone awry (known henceforth as a “JaVale”) in practice leads JaVale to land on Curry and Draymond, ending their seasons (note – I have always been a McGee fan – athletic, plays hard, goofy -pure entertainment, and oddly admirable).

Prayer – It cannot be denied that the Golden State Warriors are an unholy creation.

LaVar Ball gets his son traded to the Warriors on Draft Night and all Hell breaks loose.  Now that would be awesome. 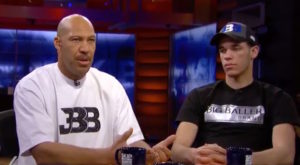 LaVar Ball may be our last, best hope to stop the Warriors.