This weekend I was featuring at Magooby’s Joke House in Timonium, Maryland (sorry for the Trump-esque title of the blog – it was really 36 hours in a suburb of Baltimore, but that is not as good a title).  It was a weekend of highs and lows (as Michelle Obama said of my comedy career “When J-L thinks his career will go high, it will definitely go low”), sickness, multiple perfect sets, one dumb or tired crowd (yes YOU LATE SHOW FRIDAY), a cozy Amtrak ride and a too cozy Greyhound ride.  In other words, the trip was all that you have come to expect from road comedy from me, but in a more condensed amount of time.  So here ya go:

I arrived in Baltimore on Friday around 2:15pm off of the Amtrak and then hopped on the “light rail” (basically two trolley cars where no one has ever taken my ticket in 3 years – but at $1.70 I can afford it, even if it is just the honor code). I then made the 15 minute walk from the station to my Red Roof Inn Plus (plus is for the fact that they have some rooms with extra amenities… I was not in the plus section). It is the same place I stayed in Fall of 2015 so I knew they got 5 stars on the J-L Road Comedy Guide for Hotels. To illustrate:

4 stars – no thefts or assaults on me

3 stars – no visible stains of body fluids on sheets or chairs in my room, but possible thefts or assaults on others

One mistake I made during this trip was not bringing my parka. I had no idea how cold it would actually be in Timonium.  It was The Revenant-cold.  And I had a 1.2 mile walk to the club each night and a .8 mile to Panera Bread. Within ten minutes of my first walk I knew I would get sick (nose still running as of the typing of this sentence).  So at 6:30pm I made my way to the club.  But these were no ordinary shows.  I was also planning on using one of my 4 sets as a submission for Comedy Central’s new season of The Half Hour.  I have dozens of sets this year that would be admirable submissions, but knowing that every 5 minutes of material having, roast battling sycophant is submitting 30 minutes I at least wanted to make sure mine did not have any extraneous material that may happen… GULP… during a working comedian’s set!!!!

So as I have done hundreds of times, I set up my camera in the back of the room and proceed to crush (I am just referring to set up the camera when I say hundreds of times – I have crushed 1000s of times!).  Like a perfect set.  After the set I walked up to my camera and saw that it had turned off.  Well, this model of the Sony Handycam series, newer than the previous ones I had, keeps a backup of everything that you cannot delete. So my memory was full and shut off the camera halfway through the set.  After cursing and pacing for 15 minutes, the club owner lent me an SD card to use for additional memory.  However, I already knew the 2nd set would not go as well, even though it was going to be a bigger crowd.  I knew, because it was me.  And I was right.  I had a strong set on the late show.  There was just one problem – very few people in the crowd seemed to agree.  I actually did a new bit at the end of my set called “J-L blames crowd for ruining his Comedy Central tape and his life.”  That actually got them laughing.

I got a ride home from local legend/comedian Rob Maher who was nice enough to come watch and hang out at the 2nd show. I then spent 90 minutes researching how to clear the memory on my Handycam.  I was able to find and implement the solution.  And that is how the future of Comedy Central changed forever…

Saturday: Homeless in Panera Bread and Another Perfect Set

On Saturday I had to check out of my hotel. Normally I would stay Saturday night and go home Saturday morning, but when I broke down how much I was earning (not a lot) and did the math of what 2 nights at the hotel and two train tickets would be (75% of not a lot) I opted to get a Greyhound early Sunday morning (12:40am) thus saving me most of the cost of a train trip and one night at a hotel.  #ComedyMogul  So with an 11 am check out I had to kill 8.5 hours without a home before Saturday shows.  So I went to Panera Bread and wrote two sketches while eating a 1030 breakfast and a 2 pm lunch.  And just a travel tip – no one does hot chocolate better than Panera.  Hot, but immediately drinkable and tastes like someone melted chocolate into a cup.  Only thing is overkill – they recently added chocolate chip marshmallows to the hot chocolate which, although tasty, turn a great beverage into a calorie heavy sugar rush.  I then made my way to Starbucks across the parking lot outside and read for another two hours before going to McDonald across the highway for dinner.  #ComedyMogul 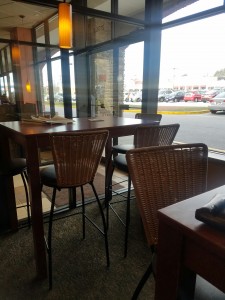 I owe a great debt of gratitude to the Saturday crowds at Magoobys.  I was already sick and dreading the pending Greyhound trip. I had only sold 4 cds to the first two audiences on Friday. The pressure was now on after going 0-2 on Comedy Central tapings. And I had no idea if my camera would fu*k up again.  Well what transpired was the comedy equivalent of Michael Jordan’s flu game.  The first crowd was great. Every joke hit and the camera taped!  Headliner said to me “That was the set; make sure that camera taped it.”  So when people ask when Comedy Central changed for the better* you can point to that perfect set that then elevated their series, etc.

The second set also went great as a nice bonus and I ended up selling 21 CDs between the two shows.  I then took Uber to the Greyhound station for the final part of this epic 36 hour trilogy. 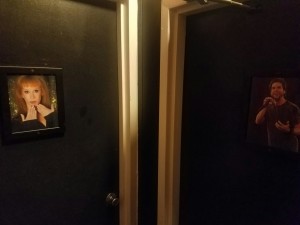 I love that the bathrooms have Kathy Griffin and Dane Cook at Magoobys. I did not verify, but I would like it to mean "for female shit" and "for male shit" 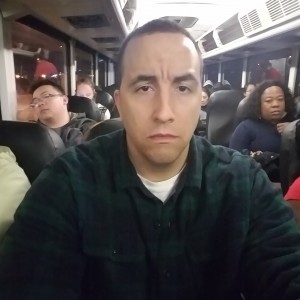 Exclusive shot of me on Greyound (c) Annie Leibovitz

I got on my Greyhound bus at 12:40am. Before me on line was a man, probably in his late 40s who bore a slight resemblance to Barrkhad Abdi of Captain Phillips fame.  The man had a backpack, a suitcase and a large plastic bag.  He had a ticket that indicated he was at the end or in the middle of an epic trip (having  taken a couple of long Greyhound trips earlier in my career his trip had at least 3 bus changes.  But beyond all these details it seemed like the man might have been slightly developmentally disabled.  As I got on the bus, having dreaded this trip all day, I thought about this man – Where was he going? Where was he coming from? Was he safe? Did he have friends or relatives helping him?  It was making me sad as I settled into my seat thinking about how meaningless comedy feels in a world where a man like that might be struggling just to maintain his existence.  And then my bus driver  yelled into the bus audio system:

silence. (half the bus sleeping)

“I said GOOD EVENING EVERYBODY!!!”

“My name is Canola and I am your driver tonight.”

So I guess laughter can have a useful place when you are feeling down.  Thanks Canola. And good luck Greyhound Abdi. I hope you are OK.