This week I am in Los Angeles for what can only be considered a media blitz by my comedy career’s standards.  Today I record an episode of The Adam Carolla Show (third appearance of the year so I really expect to start seeing the “seriously who the fu*k is this guy and why is he on the show a lot” tweets and Facebook messages) and then tomorrow I fly back to NYC to beg for bar show spots.  This month has really been a peak for me in terms of accomplishing things without management – a successful Last Comic Standing showcase audition, a TV appearance and a repeat appearance on the world’s #1 podcast.  Now if I can just win Last Comic Standing, get 2 or 3 more TV appearances and be Carolla’s replacement when he retires I should finally catch the eye of a manager or agent (did you think I was going to NOT see a negative side to all this?).  Well here is the recap of my trip so far:

I flew out to LA on Delta and paid the extra $100 for the economy comfort seat.  Made a huge difference – it really is amazing to not have my knees bleeding from being embedded in my tray table when I get off of a plane.  I watched Draft Day, the Kevin Costner movie, for free on the flight and actually enjoyed it. Had a corny ending but it was an entertaining way to pass 2 hours on a cross country flight and had many scenes in Cleveland, including filming at the gas station right near the Cleveland Improv comedy condo.

When I arrived in LA I headed to my hotel.  Hotwire.com has been doing good work for me for the last couple of years in getting me good deals on hotels (the trick is you only know the neighborhood and the stars of the hotel, but not the name or exact address).  So I picked a 2.5 star hotel for very cheap within a few miles of Adam Carolla’s studio.  Now when I got word of my hotel, I was disturbed by the name – Safari Inn.  Not a chain. Stupid name.  A sign of a surfboard as their logo as if they misunderstood their own name (Surfari – surf board makes sense, Safari? No sense).  When I actually arrived at the hotel I realized that it was actually a motel.  And near my room they have posters of different Hollywood productions that have filmed at Safari Inn. Among the productions: Prison Break, CSI, True Romance.  In other words Hollywood producers look at my motel and say, “This looks perfect for where fugitives, sex criminals and Mexican standoffs could take place!”  But with less than 24 hours left in my stay in LA I have yet to murder or be murdered. #Blessed 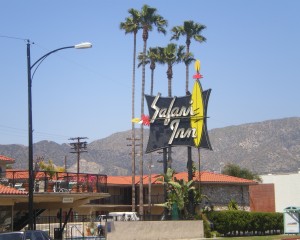 But on to the main event.  On Tuesday afternoon I went to Culver City to record my episode of Comics Unleashed.  Basically what happens on the show is the host, Byron Allen, sits with 4 comics in a talk show setting, but delivers easy set ups for you to deliver your prepared bits.  I had my own trailer with my name on it which was cool.  The show went really well.  One of the bits I was certain would kill had one line fall flat, but several including my last one went really really well and from all of that they will definitely have good stuff to make me look funny when the episode airs.  The most fascinating part of the experience to me was the crowd work.  The crowd was bigger than I expected (probably 4 times the Ferguson crowd) and there was a huge party atmosphere (DJ, hype woman, tons of cheering and dancing, etc) to the point that when I came out with the other comics to take our seats I felt like Drago in Rocky IV entering the ring versus Apollo Creed:

But so far a good trip.  Tomorrow – a recap of the Carolla day (and then a movie review of Gone Girl on Friday).