Why We Should Treat the Girl Scouts Like Old…

Yesterday I went to The Late Show with Stephen Colbert and it was every bit as awesome as I hoped.  As if blessed by the comedy gods I ended up lining up in an aisle seat (about a 1 in 20 chance) so I could stretch my Wounded Knees (my Native American name and condition) and had a great time.  The band was great (though seeing the tambourine player break his tambourine because he was “feeling the pretentious musical spirit” too much was pretty fun and Colbert was tremendous.  Missed Bryan Cranston as guest by a day, but Daniel Craig the week of a new James Bond film is not too shabby.  So, while I wish I could provide more details and emotions about the big day something much more pressing emerged in my life that I need to talk about.

The Food Emporium near my apartment (along with the whole Food Emporium franchise) is closing and it makes me sad.  In a city where neighborhoods don’t exist in the old sense (my old neighbors are nice, but then they die, and everyone under 40 appears to be buried in their phone and be uncomfortable with acknowledging another human being), the supermarket, along with pubs and diners are the only place to feel like familiar faces and smiles still exist in making Manhattan feel even slightly like a community.  Well the silver lining of the Food Emporium closing is that there are big sales on all items, including cookies.  However, all the Nabisco, Entenmann’s and Pepperidge Farm products were very quick to go.  By the time I went for my Cookie Looting Keebler was the only major brand still available in bulk.  Not only are Chips Deluxe incredible (flour, a stick of butter and chips per cookie), but there were tons of them left.  But then I noticed large stacks of cookies called Coconut Dreams.  My date to the Food Emporium (taking a chick for a Fage yogurt and ziploc bags is not so much my “Netflix and chill” as it is my “steak dinner and vacation” – times are lean with my comedy bookings/income) then said words that may echo the death knell to the cartel of cookies known as the Girl Scouts (ahem – cisgender girl scouts as they may later in life identify as something other than girls/women – WAKE UP CISGENDER GIRL SCOUTS – IT IS 2015!): 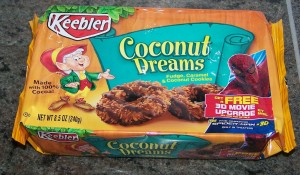 Much like the earthquake that sounded when Jesus Christ took his last breath, all sound stopped when I heard this question.  As you can see from the picture on the package, they are awfully similar to Samoas, so coupled with the discount being offered I bought a package of them.  25 minutes later the package of Samoas masquerading as Coconut Dreams was gone, vanquished to my belly, the same way the Girl Scouts’ monopoly was vanquished.

They are identical to Samoas, the cost less per package and there is no office guilt to support your co-worker’s daughter, who cannot even be bothered to make the sale attempt herself, and no wait time (if you are going to make the argument that I can order them on-line).  Samoas are the best cookie, possibly ever, and now, like Palm Pilot and Blockbuster video the antiquated and lazy monopoly of the Girl Scouts is over.  However, there is a problem:

The Girls Scouts are not old black men.

Yes, you read that correctly.  In our culture black people are stolen from constantly, from their bodies to their physical attributes to their artistic contributions. But stealing the inventions of black people, men especially, is part of American tradition.  But stealing from little girls, especially white girls, is pretty much the exact opposite – it is never done and almost certainly Keebler would be treated like Elvish Hitler if these cookies become more widely known.  That is why, in a Matthew McConnaughey-esque, A Time to Kill moment, we must imagine that the Girl Scouts are old black musicians.  Now, instead of thinking of the Girl Scouts as chaste angels worth our protection, think of them as old black blues singers that are road bumps on the way to our favorite white musical heroes!  No one wants to buy cookies from Muddy Waters, especially when the white Keebler Led Zeppelins rock so much better!

So go to a supermarket and buy yourself some Samoas – I mean some Coconut Dreams – the tasty white shreds from the old brown casing – HOW SYMBOLIC! They are delicious.  And someone informed me on Facebook that I was years behind in this discovery, but sometimes it takes a blogger/comedian of huge relevance to make it known to the wider public. You are welcome world.