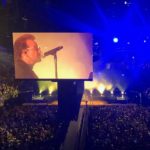 Sunday night I went to see U2 in concert at Madison Square Garden. The tickets were a birthday gift from my girlfriend.  I pulled a podcast Trojan Horse (mentioned U2 as a bucket list band I would really like to see on a podcast episode, which she listened to and then purchased tickets for me – not quite a Patreon account, but basically the same result).  In a stroke of cosmic bad luck turned good luck, my phone was broken (I have a special endorsement deal with Sprint where they don’t charge me a lot and in exchange for that I get terrible service and hardware #ComedyMogul) so I was forced to enjoy the concert with nothing but my eyes and ears (at events like this I am not a “take video and selfies all concert long” person, but I do like to keep a comedic commentary for my 17 fans nationwide. Instead I just told my girlfriend to take a photo any time something humorous occurred to me. Not having a cell phone at an event is a rather liberating thing and really draws attention to how much people use them at events.

First thing worth noting is that Anthony Bourdain is not dead and is playing bass for U2:

By way of introduction I am a big U2 fan. I own more U2 albums than any other band or artist (my own 6 albums are a distant second) and am a big fan of their recent work (the centerpieces of the tour “Innocence and Experience” are their 2013 album (the free one that everyone complained about. A great sign that Trump was heading our way was the outrage people felt from one of the great bands of all time giving away a good album for free on their iPhones and iPods) and their 2017 album, which is outstanding.  The set piece for the show was a weird one which guaranteed great seats and awful seats for everyone in attendance at some point during the show.  As far as the music, they played about 6 songs off of the new album, one off of the free album and at least a dozen hits from between 1982 and 2006 (nothing off of The Joshua Tree (probably because they did a 30th anniversary tour for that album last year) or No Line on the Horizon, the only blemish in the last 18 years of U2’s output in my opinion.

The surprise of the night for me was “The Blackout” (off of the new album). It was the 2nd song of the night and possibly the best performance of the whole show.  I liked the song on the album, but it really rocked (thanks largely to Anthony Bourdain’s jacked up bass).  On top of that they were performing it within the screen shown above, which created some cool visuals.

Another highlight, and the one time Bono’s political talk coincided with great art was when he played “Staring at the Sun” off of Pop (one of two albums between their greatest work, Achtung Baby, and their return to form in 2000 with All That You Can’t Leave Behind that I didn’t buy), set to a backdrop of alt right videos, which then transitioned into “Pride” and videos of MLK Jr and modern protests.

The band was outstanding and the encore was phenomenal (“One” off of Achtung and “Song for Someone” off of the new album). The Edge, Larry and Bourdain (Adam Clayton) were all outstanding, but Bono, who is always going to be the face of U2, has reached Mick Jagger levels. And by that I mean he can’t dance to his own music, but the music is so great that you don’t really care.  Bono moves like the uncle who tries to tear up his niece’s wedding dance floor, but just looks goofy.

But if you are thinking, “But J-L, where are the complaints?” Well, just one, the annoying millennials in front of us, kept standing and blocking the view. No one said anything when one woman was dancing (I keep landing behind that one woman at concerts who dances, but not really for the music, but just so people can see her dance), but then they would just stand absent-mindedly, blocking our view. But otherwise – a phenomenal show.