It is the beginning of a new year so it is a time for people to claim that they will attack 2016 with a new fervor and sense of purpose (they won’t) or to self-aggrandize through reflections on all they learned and grew from in the previous year (they didn’t).  I have opted for a different approach.  Rather than focus on myself I opted to adopt a dog. #Hero.  Her name is Cookie and she, to the best guesses of dog people, is half golden retriever, half beagle (sort of like the canine equivalent of Kathy Moriarty and Robert DeNiro’s marriage in Raging Bull).  I began my adoption process in earnest in the Summer of 2015, when I realized doing legal work from home AND having a comedy arc with less promise than Stephen Hawking’s MMA career provided me with a lot of free time that I could give to a dog in need.  I expressed interest in some dogs (always small – my building has a weight limit on dogs, usually pure breed golden retrievers and cis female (they are usually calmer than cis male dogs and call me old fashioned, but I didn’t want a trans female dog) – the organization Adopt A Golden – Knoxville – specializes in golden retriever rescue), but never was matched up because of high demand (and most people had large yards, kids, hope, etc. so they got preference for a lot of the dogs).

Sidebar – I never even realized golden retrievers needed rescuing – I thought they were like the busty blonds of the dog world – when was the last time you saw a chick that looked like Anna Nicole Smith or Pamela Anderson homeless?  I thought it worked that way with dogs too.  Apparently not.  There are several golden retriever rescue operations, though because goldens are the best dogs in the world – there is a lot of demand from people who want to tell you they rescued a dog.  Let me be clear – I didn’t rescue sh*t. I adopted.  #HonestHero

OK – so after missing out on a couple of dogs I started to get discouraged.  Then in mid Fall the organization got a group of golden retrievers from Turkey (I wrote jokes about this and then a month later CNN actually ran a story about how in Turkey Goldens were a status symbol, but then when people found out that puppies don’t stay that way they began abandoning them,  So I saw some of those goldens, but also a small mixed golden named Olivia.  She was not a Turkey dog, but rather, she was found abandoned in a Kentucky trailer park starving and scavenging for food. She had mange, a bad skin condition, and also was working as a stripper at a full nude club… on the day shift.  In other words, Olivia was living a very rough life.  But clearly she had a resilient spirit because she survived. However, she was sent to a shelter in Kentucky with a high kill rate (Southern states love the death penalty for all species). Hearing about this, Olivia was sent to Adopt a Golden – Knoxville who took her in to avoid her going from the pole to the electric chair.  They got her healthy of her skin issues, fed her good food and then got her into a foster home where she became a very sweet dog that liked to play with toys.  I expressed interest in Olivia and I think because I am mixed race, the people in Knoxville said (in Southern sheriff voice from the 1950s): “Pure bred goldens are for the WHHHHHHHITE Man. Give this mixed bred pup to the product of an unhhhhholy miscegenation!!!”  Or they just thought I would be a nice pairing with her.

So in mid December I got the word that I would be given Olivia, but I declared in a Roots like statement – “Her name is Cookie!”  She was then spayed and had to spend another 11 days recovering in Tennessee (or just wanting word to get to NYC that she could now raw dog consequence free – come on – a cute trailer park Southern chick? You know she is DTF until I get her back to a normal life #FatherFigure). 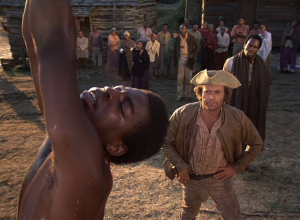 Cookie needed to learn her name one way or another

So on January 1st I drove with my girlfriend to Spring Valley, NY to pick up Cookie in a strip mall where an organization, Pooches on the Move, shuttles adopted dogs up North to waiting families.  It is like if Jeff Daniels from Dumb and Dumber ran the Underground Railroad. We arrived early, got some Burger King (“new me, new body” lasted 21 hours in 2016), and then waited in the parking lot (it felt more like I was waiting for a meeting with Waingro in Heat, than for a dog).  Then a large van approached at 10:20 pm and numerous people emerged from cars in this parking lot.  We all made our way over and, yes it was the van!  Now Olivia (YOUR NAME IS COOKIE!) was on the van for approximately 14 hours so when she came out she was excited, freaked out… and went to the wrong couple.  Yes, the woman in the van walked her over to the wrong people and they had a look like “we didn’t order this” so I asked one of the van women “Is that Olivia (YOUR NAME IS COOKIE – *whip*)?” And she said yes.  So already I missed that initial moment of joy of greeting Olivia (YOUR NAME IS COOKIE *whip* (tears)). Just proving she was a woman of ill repute from the south, thirsty for anyone to pet her.  Well, I took her leash anyway because I am a good man (like when Smith Jared hugged Samantha in Sex and the City, even after she had just gotten plowed by Richard the Gap-Toothed Hotel guy, while Smith was at the hotel waiting for her) and I jogged her around the strip mall before getting her into the back seat of the car. 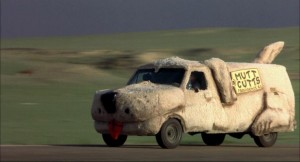 This is how the Canine Harriet Tubman travels north

So far she has sh*t twice inside my apartment, but she is on a 2 sh*ts in a row outside streak, which I hope will continue until one of us dies (I have Cookie in my apartment death pool, which may explain why she keeps telling me to eat more cookies), although she has yet to piss outside.  And a quick note to the makers of wee wee pads – either they aren’t “super absorbent” or my dog urinates the same stuff that dripped from the Alien’s mouth in Alien.  As expected she has nothing but happiness for my girlfriend and mixed feelings for me (I told her, I don’t care how they got down in Kentucky trailer parks, but she can’t get on or in my bed).  She is also terrified of fire engines to the point that this morning (Sunday – Jan 3) she forced her way out of her leash and sprinted one full avenue faster than I could ever run, even in college when I was playing basketball (I have since adjusted her leash to”Almost Eric Garner” level). The good news is that she ran right to my door and waited for the doorman to let her in.  The bad news is that she is fu*king crazy.  Maybe in Kentucky fire departments shoot dogs of color and she doesn’t want to be about that life.  Silver lining she is the fastest and strongest 40 lbs dog I have ever met – so if Petco offers doggy cross fit classes please let me know. At least if she reforms her whorish ways with exercise she won’t turn into one of those enlightened “spiritual” chicks.

Oh well, here is to the birth of a new friendship, new levels of stress and happiness and me having to say no to the 1.8 road gigs I am on pace to get this year.  Here is a pictorial history of Cookie in case you are illiterate and don’t enjoy reading the best comedy writing since Oscar Wilde and Mark Twain. 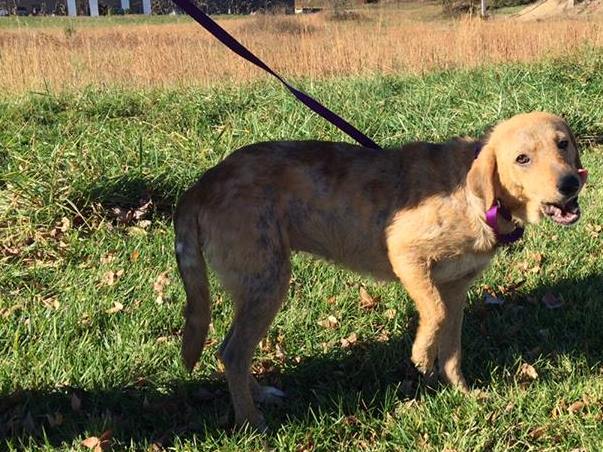 Cookie when she was moved to AGK. Her coat was nasty as hell 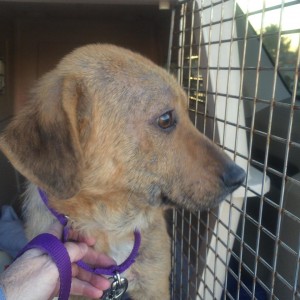 Patchy and terrified is how she looked when arriving in Tennessee 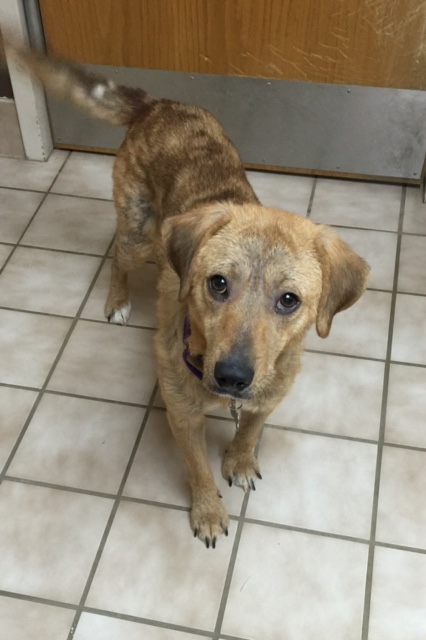 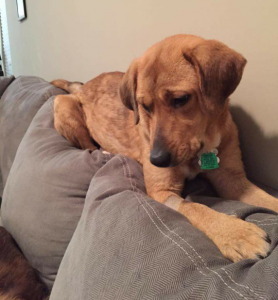 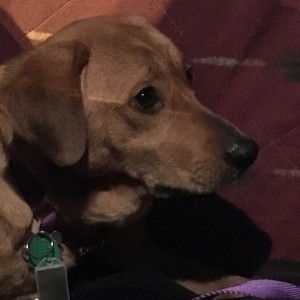 This is Cookie in the car leaving with us. Hey - why the terrified look again??!! 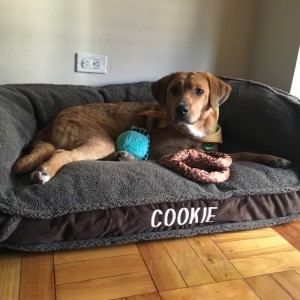 And this is Cookie on her bed in her new home. God help us all.