This week’s comedy destination was Washington, D.C. for 6 shows at the DC Improv.  Because I had to put myself up in a hotel I did what I do with all comedy trips that won’t make me much profit… I asked my girlfriend to join me for a weekend getaway (this is the way that I rationalize my comedy career – rather than being a struggling feature, trying to make a profit I instantly become a guy who gets paid a few bucks to take his girlfriend on vacation). #CheapVacationMogul.  I arrived Thursday solo at the Westin City Center. It was a very nice hotel that I was able to swing a good deal on through Hotwire.com. I knew it was a nice hotel because nothing was included. Internet, breakfast and prostitutes were all additional fees. Normally when I go to a hotel it’s a Hampton Inn where they give you Internet, a waffle iron and a townie 7 to warm your bed, all for $62 a night. No such luck with the DC Westin.  My favorite thing about hotels like this are the breakfast options.  “You can have a thimble of coffee and one scrambled egg for $25.50… or our buffet which features, eggs, pancakes, french toast, pastries, cereal, an omelette station and a therapy dog for $26.00.”  Hmmmmmmmm, can you come back and let me consult with Jared Kushner on the pros and cons of both options?  So as I write this in a coffee shop (I had to check out of the Westin at noon, which leaves me as a nomad in DC for 5 hours before Mass and comedy tonight before hopping the 1010pm train back to NYC) here is a recap of the week in quips and photos:

With my lady not arriving until Friday morning, Thursday became “Thidepiece Thursday.”  Only one fan showed up (thank you The Black Guy Who Tips for having the most engaged and loyal fans anywhere) and she was attractive, but unfortunately she did not get the memo about Thidepiece Thursday because she rolled in with her man. Maybe because he felt guilty about violating Thidepiece Thursday etiquette by showing up or because no one had bought any of my merchandise after the show, but he bought all three albums I had for sale as he and his lady were happy with the show.  So I guess I will let it slide.

But after the 1 pity purchase I texted my girlfriend at 12:01 am (First Lady Fridays) and said, “Bring a bag with room; you are going to have to bring some of these CDs back home.”  And not to be too down, my buddy Ross and a friend of his also came to the show so obviously I am being modest about my ability to draw audiences nationwide. We sat in Shake Shack in between shows and talked about deceased relatives, just to keep it light.  Here is a fun clip from the show:

The girlfriend arrived Friday and we promptly went looking for food.  Fridays during Lent mean no meat for Catholics so she got some free-trade, goat cheese-quinoa-avocado wrap that was smuggled out of Brooklyn and I got two slices of pizza.  I actually walked from my hotel to Union Station to get her and then we walked all over DC. By the count of my new invention FatBit (which keeps track of all your steps and the fact that you are still horrible out of shape) I had done at least 25,000 steps before getting back to the hotel to prep for the evenings shows.

Before the evening entertainment we tried to go to the African-American History Museum (see my instagram – @jlcomedy – for Trump’s opinions on it) and there was a huge line. I ended up talking Utah Jazz basketball with the guy standing behind me, which is actually the least African-American way to have an NBA discussion. We then got about 30 people from the front when they said no more tickets were available #Blessed. We then went to an art museum where some Japanese lady who looks like a Pixar character had a big exhibition. We also failed to get limited tickets for that so we looked at other stuff, including a sculpture of a bald, fat girthy-cocked dude (the pic omits the girthy phallus for any young readers of bitter, anonymous comedian blogs #TargetMarket): 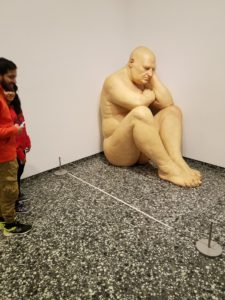 My girlfriend was meeting her high school friend and her husband at the show (THAT’S 6 FANS ALREADY FROM THE FEATURE ACT – #DRAW) and I had a very strong set. The audience was not full so I set my camera up in the back to capture the action. Unfortunately some folks sat near my camera (for no discernible reason) and bumped my camera so I learned quickly after the set that I had a great 18 minutes of the bathroom door killing.

As I steamed after the first show, and sold nothing, I considered quitting that very moment.  However, I did something smarter. I decided to counter the JL Comedy Jinx with some self-hate.  I decided not to tape my second set.  And of course I crushed. So while I don’t have that set on tape, I did sell 12 CDs after the show (including 3 to ANOTHER member of The Black Guy Who Tips fanbase – 7 FANS MOTHERFU*KERS!). I then crawled into bed next to my girlfriend, who was in a wine-induced coma, at 1 am. #SpoonSaturdays

On Saturday we woke up and made our way to her friend’s house in East Falls Church for some brunch (“When in White Women Rome…”), though before that I had the pleasure of running into NYC comedian Anthony DeVito on the street. We had a nice chat and I wished him luck on his Comedy Central taping (for blog readers, you may remember Anthony from my intimate Winery Show/Bed and Breakfast in early 2016). After brunch the gf and I went for a long walk around DC and went to the Martin Luther King Jr. Memorial and the World War II Memorial, which I think is the best thing in all of DC (thank you for your (lobbying) service Tom Hanks.  Both are beautiful.  The weather was beautiful, but then it was time to bring the lady back to Union Station (you either get 3 days in a Hampton Inn, or 2 in a Westin on the Broke Comedian Getaway Vacation Package). We ate Pizzeria Uno, which obviously put me on a 24-esque timetable to get back to my Westin bathroom and I put her on the train back to NYC. Before getting to the shows that night here are some photos (more on my Instagram): 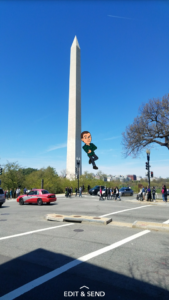 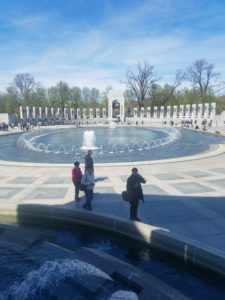 WWII memorial is an incredible sight – full view of Washington Monument on one side, Lincoln Memorial on the other and a beautiful design and tribute 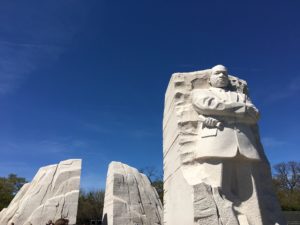 GF captured a perfect angle of the MLK memorial 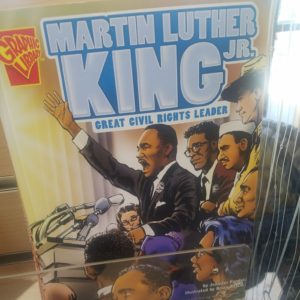 That night I arrived at the DC Improv for three shows and was greeted by friend, former podcast guest and DMV comedy legend Rob Maher.  We chatted and then I went on stage and did the Lord’s work.  I then went into the DC Improv Lounge to follow another DMV legend and friend, Randolph Terrance and crushed even harder than in the main room (I feel like my new bit on the “Fluidity of Sexuality” would please most comedians and members of the Nixon White House). I then had my best post show sales of the week (I opted not to give CDs to the gf to bring back – either I would sell them (good) or be furious that I was dragging them back to NYC (justifying my rage at comedy) to the point that I had to run back to the Westin to get the remaining copies for the late show.  All joking aside, I do wish I had gotten a job in DC over NYC after law school because the DC comedy scene has always been my favorite.

I had a very good second set and sold a few copies more. Then I received news that Louis CK had started his SNL monologue with a “Why Did the Chicken Cross The Road” joke.  So as I kill some more time on this beautiful DC Sunday, enjoy my video from 2013 that proves that I am way ahead of Louis CK. #JLouisC