This weekend (well Thursday-Monday morning) was spent in Syracuse, NY – the city that the Sun forgot.  I was featuring at the Syracuse Funny Bone, located in the Destiny Mall – a mall so large that they have an entire store dedicated to Crocs, or as I call it, a recruiting tool for ISIS.  The comedy week really began last Wednesday night when I played Batman in the Roast of Batman at Broadway Comedy Club. I had a good performance and tried to emulate the Christian Bale Batman voice (video forthcoming), but in terms of attire I had to wear a tight Batman shirt and a hot rubber mask (and then went right to a Batman themed Eyes Wide Shut orgy) because the XXL Batman costume basically fit like Freddie Mercury in the pants and like Chris Farley wearing David Spade’s jacket in Tommy Boy up top.  But the jokes went well and then I went to sleep for an early trip to Syracuse the next morning. So without further adieu here is the recap of the trip:

As I write this from my return Amtrak Monday morning I am happy to report that we are on schedule.  The same could not be said for Thursday morning’s trip to Syracuse.  I have written a lot over the years of my affinity for, and frustrations with, rail travel in this country.  As part of the stimulus plan when Obama took office many dollars were earmarked for infrastructure improvements and additions to state and federal rail service.  Much of it was scrapped, especially in states like Florida and Ohio with Republican governors.  I have thought for many years that there should be a massive – like hundreds of billions – investment in making our nationwide rail service comparable to Europe and Asia.  Improvement to our infrastructure, thousands upon thousands of jobs, upgrading our transportation system and giving something for people to use – feels like a win all around, which is why I think various lobbies, probably aviation at the top of the list, have worked hard to kill this (in addition to the GOP wanting to privatize rail).  So instead what we are left with is a 5.5 hour trip to Syracuse that takes 7 hours because Amtrak, once out of the DC-Boston corridor (where the money and power reside) Amtrak does not own the tracks so freight always gets priority – on my last 5 long range trips (5+ hours) the average arrival has been just a few minutes short of 2 hours late.  I am no populist and am a happy Hillary voter, but nothing more richly symbolizes America than business being given priority 100% of the time over people on the rails of America.  When I finally arrived in Syracuse (after we had to ride 30 minutes past the station because of a disabled train at the station so we could switch tracks) the sky looked like the beginning of the Battle of Helms Deep in The Two Towers, so very welcoming.

Thursday’s show was solid. Nothing big to report, but worth noting is that two stories below the club in the mall was a Cheesecake Factory. So I had a slice of the Hazelnut Cheesecake while the headliner was on (it’s their new flavor and it may be the best they’ve ever done).  And just to show you the admiration and respect the Mall has for the money printing machine that is the Cheesecake Factory check out the side of the Mall as they are every bit as powerful as Saxs Fifth Avenue and Macy’s (and only Cheesecake Factory appeared to have reserved parking for their management in the Mall parking area.

On Friday I went to see Deepwater Horizon, the Peter Berg directed movie starring Mark Wahlberg about the Exxon Valdez spill (kidding for those of you who are bad with jokes).  I have made a lot of fun at the expense of Wahlberg and Berg (sounds more like a law firm) because they have been on some sort of draped-in-the-flag mutual masturbation series of films recently (starting with Lone Survivor, which was OK and then next month’s Patriot’s Day about the Boston bombing these guys are making short, white American men feel even better than Donald Trump).  The preview for Patriot’s Day is literally like a remix of the Deepwater trailer – white guy kisses pretty wife while guitars strum, then goes to work trying to make the world a better place – then bad sounds and ominous shots – and then title screen.  I said on my podcast the next Wahlbergberg movie is probably going to be called Standing Blue – about a white cop who protests San Francisco 49er games because Colin Kaepernick won’t stand for the anthem.

Now, with all the jokes out of the way, I must give the Wahlbergberg devils their due – Deepwater Horizon was excellent.  Incredibly well executed (minus some of the given cheese in the first 30 minutes of the film), well acted (Gina Rodriguez was not quite Tom Hanks at the end of Captain Phillips (GOAT PTSD performance) but she was really good when given a chance to flex her chops and Wahlberg was solid, as was Kurt Russell), and quite powerful. Highly recommend.

As for the shows on Friday – I crushed obviously, but in my arrogance I slipped up. I am not a big cheese eater unless it is preceded by “grilled” or followed by “cake” but I opted for the quesadillas during the 1st show, then got cheesecake in between shows and then, in a moment of boredom, got the mozzarella sticks during show 2.  What happened next was nothing short of Deepwater Horizon meets Harry from Dumb and Dumber. I will spare the details, but I got back to my hotel room at 1230am and left my bathroom at 3:05 am.  In between dumping crude oil into the Syracuse sewage system I also vomited so hard I thought I burst a blood vessel in my right eye (just turned out to be bloodshot with cloudy vision for an hour).  If my stomach had been any worse Peter Berg could have directed a movie starring Mark Wahlberg about the plumber that would have had to come and fix my bathroom. Porcelain Knight coming to theaters 2018.

And here is me crushing in an extended bit about my dog Cookie.  Another clip of me doing Trump is getting a lot of hits on Facebook (my Trump impression is so powerful it turns conservative, upstate white voters into a Def Jam crowd)

Saturday I saw the movie Ouija, which was not very good (other than Lights Out – critics have been off bigly with this year’s horror offerings).  I also ate very little because my stomach felt like it had been through a war.  So there was nothing much of significance to report other than the fact that I crushed hard.  Several people told me my Trump bit/impression was the funniest thing they had ever heard. I agreed with them.  But in two shows I only sold 1 CD.  So I went back to the hotel bummed, but hopeful with one more show left in the week.  #LiveLoveLaugh  Here is a picture of Jake The Snake Roberts and I from the club. If you don’t follow me on Instagram, this is Jake doing his impression of me when I heard Jake The Snake Roberts was headlining comedy clubs: 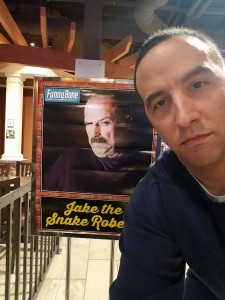 Sunday began with being woke(n) up by the high school band that occupied every room on my hotel floor except for my room and the headliner John Henson (of Talk Soup and Wipeout) and they were loud and annoying, but I had already gotten the 4.5 hours sleep I need to be an angry, lazy, bitter sloth of a comedian so I was good to go.  I went to see The Magnificent Seven and was joined by John, who either because he wanted an aisle seat as well or just wanted to assert his headliner status, sat one row above me in the theater.  The movie was not very good. I feel like Denzel, Chris Pratt and Antoine Fuqua were all better than that movie (though Pratt was annoying in his overly charming performance).  Then it was time for the final show.  I did very well and sold the most CDs (10) than any other show for the weekend. I felt so confident that I had a 3rd and final piece of cheesecake, which as of this typing has not done any damage.

All in all it was a great weekend working with John and Mr. Jackson (the emcee), as well as Rob, the chauffeur, door guy, former strip club bouncer who escorted John and I around for the weekend.  Looking forward to coming back in 2017! Now I get to see my dog Cookie, who is not thrilled about her Cookie Monster costume, but fu*k it – she looks cute in it. And if Wahlbergberg have taught us anything, it is heroes don’t always do the easy thing, but they do the right thing – coming in 2020 Mark Wahlberg as Cookie the Dog in Halloween Hero directed by Peter Berg.