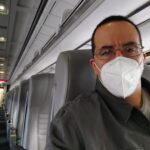 This weekend I headed off for my first road work of the new year. I was performing in the capital of Pennsylvania, Harrisburg (I think Harrisburg is one of those capitals, like Albany, Austin and Sacramento, just picked to throw off school children trying to memorize state capitals – “What do you mean the capital is the 9th most important city in the state?”).  I have a very busy day today (would have written this on the train home on Sunday, but there was no café car to sit in, so Monday morning had to do) so I may make this briefer than my usual road reporting, but don’t take brevity as a lack of gratitude for surviving a weekend in mask-less Trump Country!  Here we go:

Friday – From VIP to MIA?

When I got on the train in Newark (the Rhianna to NY Penn Station’s Beyonce, in terms of homelessness and discomfort) I made my way to the Quiet Car. And it was just me and one other dude, so I began reading my Malcolm X biography in peace and 3 hours later we pulled into Harrisburg.  The quiet car never exceeded 12 people in the whole car so I arrived in Harrisburg feeling like I was already ahead of the game in terms of Covid safety.  I would need that head start…

I got a Lyft outside the station and we made our way to the Club/Restaurant/Motel (all in one building).  However, with the Christian Rock blaring (please check my Instagram from this weekend for the full story/bit) my driver made a left turn about 70 feet too soon, leading us back on the highway toward Pittsburgh. 10 miles, one stop and a near t-bone later we got to the club/restaurant/motel.  When I walked in to check in there were two men, who could only be described as “Real Life Waingros” (Heat reference) very angry at the $85 a night rate that they would have to pay at the West Inn.  Now normally, financial struggles would make me sympathetic, but my prejudice does kick in when you and your friend look like dudes who were told they couldn’t go to the January 6th rally because they were too scary.  The receptionist told them that they could try the Budget Inn next door which, in her words was, “Not good, but it is really cheap.”

After I checked in I went to my room, which was actually decent (first of many surprises this weekend), though I had a door and a window that looked directly at the… Budget Inn.  For almost the entire weekend I kept my window shade closed for fear of either witnessing a murder, an amateur snuff film or a drug deal, while also not wanting to show off my working lights and 28 inch TV to a potentially jealous clientele at the Budget Inn.

As I walked through the restaurant to get to my motel I noticed a Trump 2020 flag on the wall and zero people in a very crowded bar wearing masks.   Uh oh…

I then went to the table (no desk) in my room and began doing legal work before the show, which is of course how all the comedy greats warm up for a set.  Fortunately my day job computer has great battery life because there was only one unused outlet in the entire, relatively large room and it was nowhere near the table.

I then went to the club, had some chicken tenders and a water, brought to me my my masked waitress (#TrustBlackWomen).  Between the tasty fingers and fries and the masked waitress I began to feel like perhaps the comedy club was an oasis of sanity and goodness in an otherwise Trump hellscape.  The emcee and the feature both had strong sets and then I crushed.  Seriously, the crowd was really good.  Some fans showed up, some new fans were made and when I went back to my motel room that night to resume legal work (true) I felt a glow, like I was seeing Harrisburg through rosier colored lenses – that is the power a good show can have on a comedian, at least on this comedian.  But I still didn’t open my shades to see what was happening at the Budget Inn.

Saturday morning I went to McDonald’s for breakfast, which was delightful. I noticed they no longer serve their hotcakes in Styrofoam, so I guess the radical left has finally gotten to Mickey D’s!  I read a little and then went back to do several hours of legal work in the motel.  For the safety and security of future comedians I will not describe the morning entrance and exit of the motel/restaurant/club, but if the Budget Inn residents ever want to take over the West Inn, there are easy ways…

In the afternoon I made my way to a Starbucks a few miles away to read some more and then walked over to a Catholic Church for Saturday evening vigil Mass.  Like most Catholic Churches I have been to in this country (besides my own in Bloomfield, which is by far the most diverse Catholic Church I have ever been a member of) it was white as hell.  It was me, an Asian couple and an Indian priest among a packed, mostly mask-less white mass.  I always want to ask people in situations like that “don’t you think it’s weird that 99.8% of your Church is white? I am not blaming you individually, but don’t you think in a country like ours that that is sort of odd, at least?”  In a moment that made me laugh, the priest ran out of Communion wafers.  If I were not a pious man of great discipline I would have yelled out “WE WOULD HAVE NEVER RUN OUT OF JESUS IF TRUMP WERE STILL OUR PRESIDENT!”

I went back to the motel and prepared for the Saturday night show.  The crowd was much bigger than Friday and they were a great crowd again (Seriously, I talked a lot of shit about Harrisburg on my way and while there, but I have nothing but good things to say about the crowds and the club – and it was not enough money for me to lie for them!). Before my set I was told by my waitress that I had “walked out on my tab” the night before (#DontTrustBlackWomen). As it turns out I had assumed that my glass of water and chicken tenders were comped, but they were not.  I settled up after the second show (#StopTheSteal).

The Saturday show was a great way to start the new year. The audience was great, some fans showed up, some new ones were made and I was able to capture a beautiful moment dealing with some Trump-loving hecklers.  The video is already doing work on Twitter so here is the full video on YouTube – watch it and please share it:

In full disclosure I tried to reason with the people later because despite their brief heckling and abhorrent political views, they laughed at themselves and were happy with the show.  And it is definitely naiveté and my love of comedy that still gets me to believe that if people can laugh at themselves then maybe they can be reasoned with.   Probably not, but when I made one of the MAGA dudes’ girlfriend smile at an idea I told him from the stage “next time you want to say some dumb shit like ‘Let’s Go Brandon’ don’t and say ‘well that lib cuck comedian did give me a good idea for a gift for my lady so I’ll give Sleepy Joe a pass this time.'”

I then went back to the motel room and went to sleep with a prayer of gratitude, “As I lay me down to sleep thanks for the great show in front of those Trump sheep.  If I die before I wake, please don’t let it be from a Budget Inn rape. Amen.”

All kidding aside, if you were at the shows or part of the shows in Harrisburg, thank you very much. It was a trip I had low expectations for, but ended up enjoying myself thoroughly.