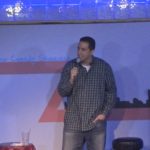 This weekend I was making my headlining debut at Ann Arbor Comedy Showcase, a terrific club in Columbus, Ohio (that’s some Big Ten football rivalry humor).  There were two shows Friday and two shows Saturday. The crowds were great, the headliner was greater and the travel atrocious.  If you are familiar with my travel stories over the last decade since I started doing road work regularly, you know that Amtrak and despair are my most frequent travel companions. This trip would be the apex of that travel history.  Before breaking down the weekend here’s the math: I spent 38 hours in Ann Arbor, Michigan and 43.5 hours in Amtrak facilities.  To paraphrase Jamie Lannister, “The things I do for self-destruction.”  OK – here goes the recap!

Hello Darkness my old friend! – it was another trip on the infamous Lake Shore Limited – the Amtrak train that goes from NYC to Chicago by way of Australia.  The trip to Toledo (the stop where you get off to get the Amtrak bus to all parts Michigan) is supposed to last 15 hours, ending with a 6am “de-training.” Well, we got stuck in Albany, NY (2.5 hours into the trip on time) for 3 hours. So in the time I was stuck in Albany I could have gotten off the train, gone to Albany airport and flown to Detroit before the train left Albany. So we ended up getting to Toledo at 10am.  But, despite the fact that the Amtrak bus ORIGINATES in Toledo, apparently our 4 hour lateness was not quite enough time for the bus THAT ORIGINATES in Toledo to make it to the station on time.  It ended up getting there at 10:30 and I was in Ann Arbor at 12:20.  I ordered a Lyft and the driver told me that her cousin was Karlous Miller (a finalist on a season of Last Comic Standing). I did not think it was a good sign for the weekend that Lyft drivers in Ann Arbor were able to one-up my career, but so be it.

Since I had managed 3 hours of sleep on the train to Toledo I was full of energy to explore Ann Arbor once I had checked into my hotel. So I walked towards a movie theater to see John Wick 3 (worst of the three Wicks, sorry Keanu) hoping to see some stores or eateries to write in and assess the Tator Thots in the rust belt.  But all I walked by for 2 miles were car dealerships.  Seriously.  But then I found a nice little coffee shop near the movie theater and sat mapping out soon-to-be legendary sets.  After a late lunch of popcorn, M&Ms and Wick I headed back to the hotel to shower off the Amtrak Funk for the shows.

The crowds on Friday were not too large, but they were outstanding. I then retired to my hotel to get a very important night of sleep (#Foreshadowing).

I woke up Saturday to a solid complimentary hotel breakfast (Danish, Belgian Waffle, youth sports teams not saying thank you when you show them courtesy at the buffet) and then did my review of the sets from the night before, which conclusively showed that I am great, but could be greater (as Saturday’s game day adjustments would bear out).

Knowing I would be on a train all Sunday I went to Mass on Saturday evening (#PrayerWarrior). I got a Lyft and my driver was a former model (she moved to NYC as a teen and was a model for many years – I believe her is all I’ll say) who moved back to Michigan to have kids and start a life coaching business (that was my confirmation that she definitely had been a model). So I was 2 for 2 in Lyft drivers being able to one up me in success in the art/fame pursuits.  Mass was Mass, though from the below picture you can see that these Midwest Churches are not playing second fiddle to the South:

I then ate some delicious food at a local BBQ spot (warning – I am not a food d-bag so if you are some guy who bathes in his own dry rub and wins contests in Texas for best bbq while carrying an AR-15 then you may not judge the food as I did, but I loved it)

The shows Saturday night were awesome. Bigger crowds and even some fans from my appearances on Sirius XM and The Black Guy Who Tips.  Sold a lot of albums and then went back to my hotel. My train back to NYC was to depart Toledo at 3:15am, but I decided to not risk a lack of availability of cars later in the night so I called (app’d? Summoned?) a Lyft to take me the 70 miles to the Toledo station. A White Lady named Sharon accepted and then abandoned me 7 minutes later (#AbandonmentAmy), which is when a Black Queen named Sharon (am I doing this right Black Twitter?) accepted. She got me to Toledo 7 minutes faster than the estimate and I gave her a strong gratuity (#ComedyMogul is back!).  So at 2am I stepped into the Toledo Amtrak Station.  Before continuing to the horror portion of the story here are two new bits/clips from Saturday’s shows:

The station was fairly crowded. As I would learn it was because every train out of Chicago was extremely late. So I sat next to a young woman with blue hair, two tongue studs and a batman t-shirt (ummm are we soul mates or are you just here to star in my Make-A-Wish porn film The Beige Knight?).  And that was when the alerts started coming. My train would not arrive until 4:30am (a 90 minute delay). Shit.  Then another alert. And another. And another.  My train eventually arrived at 7:30am. I got into my room (rooms were cheap from Toledo so I got a sleeper car using points, figuring I would be getting on the train before daylight), which was prepared very nicely for slumber  by yet another Black Queen (#TrustBlackWomen) who also got a nice gratuity from me (the world will be a better place if I ever become rich and famous). I managed to sleep for 3 hours and that is when the real adventure began.

We were 4.5 hours late in Toledo and kept losing time city after city. Then we arrived in Rochester. Delay because a man was threatening to jump on the train tracks. Then we got to Syracuse. Delayed due to freight train traffic (America – where freight always gets priority over people, which is the main cause of many delays on our country’s rails). Also delayed because of a tornado.  So I took photos and a video. From that video, three different weather services contacted me asking for permission to use the video with credit.  Never a good sign for your comedy career when you crush 4 shows as a headliner and your only glimpse of success is from a weather video you shoot on your phone in Syracuse.

We kept getting delayed and at 9pm I turned off my phone for the rest of the night to avoid any Game of Thrones chatter. We finally arrived in Penn Station at 12:15am, but like a horror villain popping up right before the credits to slaughter our hero, the train then had to reverse for over ten minutes to actually go to the right platform. I stepped on the platform in Penn Station at 12:30am. I took a cab home to get my dog Cookie, who peed in the kitchen, but she didn’t spoil GOT for me so I didn’t scold her.  I took her out for a walk and then watched the finale of GOT (I liked it – it wasn’t going to be another epic bloodbath folks). I then slept better than I have in a long time – 6 hours.  Thanks Ann Arbor!