Road Comedy Recap: A Special Episode of This is…

Recently it has felt like stand up comedy is less a passion or profession I am pursuing and more an angry Albanian engaged in a blood feud with me. Beyond my usual gripes about the comedy industry (see 90% of my podcast episodes for more specifics) my last few weeks have felt like an installment of the Final Destination film franchise, where Death is determined to stop me from performing comedy.  Last week, after being booked for the Toledo Funny Bone since January I decided to email the club to confirm my spot (it would be the third time performing there, but knowing that the Comedy Grim Reaper is determined to push me back into the full time practice of law I figured that I should confirm just in case).  The response I got back was “Yes, the hotel is the same, but we don’t have you until the end of the month.” Now this was 27 hours before I was scheduled to leave for Toledo, so I had my round trip train ticket and more importantly had not picked up any day time work for the week (which pays more than a week of featuring, so it was a double whammy). And add on to the fact that I am booked elsewhere when Toledo said they have me.  I will spare you the transcript of my reaction within my apartment to myself after a series of cordial, neutered emails, but the look on my dog’s face said “Please just send me back to my abusive trailer park in Kentucky. This “comedian” (even my dog puts air paw quotes around my career) is too angry.”  With that preamble, I will now take you to this past weekend’s comedy journey in Albany, NY.

In a sequence worthy of its own episode on This Is Us my Friday morning unraveled like the Comedy Grim Reaper was gunning for an Emmy.  I arrived at NY Penn Station at 10:50 am for my 11:20am train.  Well, little did I know that a train derailment in New Jersey had caused havoc (my guess is that it was either the Comedy Grim Reaper or Mr. Glass from Unbreakable testing to see if my comedy will is unbreakable). I will now deliver the news/plot in bullet points:

So with 20 minutes before the start of the first show Thursday I texted my girlfriend saying that I needed to quit comedy.  Most of what happens in comedy makes me angry and that anger can sometimes provide fuel and motivation. But the trip to Albany, coming off of a week of a cancelled gig felt more helpless and pathetic (which, make no mistake about it, it is). End credits.  “Next week on This is Us…”

Great Crowds Save The Day

My mood was almost immediately uplifted once I got to the club on Friday night.  Maybe it was Pavlovian – going near a stage with Guns N Roses playing in the background is as good a set of factors to trigger involuntary happiness in me, but it would be unfair to characterize it that way.  The crowds were really good and generous the entire weekend.  The headliner was John Henton, who most notably played the handyman on Living Single, a show that aired on Fox from 1993-1998, also known as a great time for a young man to discover that Tootie from The Facts of Life was all grown up (the Michael Jordan of “Damn, she’s grown!” to Ariel Winter’s Crag Ehlo).  They were great laughers and even more importantly great buyers – sold out of all my CDs over the weekend.

The Rest of My Albany Trip

I am working on new bits towards a 2018 album. Here is a clip of that bit making progress:

And if you do not follow me on social media here is a pic of me seeing one of Albany’s prized tourist attractions “Giant, Dirty Pile of Snow” 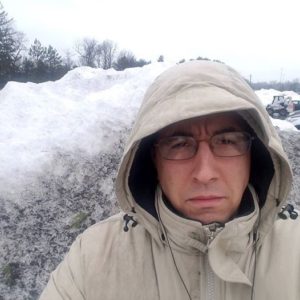 Hartford, CT starting Thursday.  Tell them I am coming.  And Hell’s coming with me… (this is from Tombstone, in case you think I am being exceedingly morbid).