Gary Gulman: Putting The Funny Back in Painfully Funny

2000 years ago a lean Jew with a gift for analogies died for the sins of mankind and reshaped the world in the process. While not nearly as historic or dramatic, two thousand years later at a low point (in this writer’s opinion) for the art of stand up comedy, a lean Jew just turned his suffering into a comedy special that may save comedy-kind from its own downward artistic trajectory.  I am speaking, if you missed the title of the blog, of stand up comedian Gary Gulman (full disclosure I am friends with Gulman and have been a huge fan and deep admirer of his comedy for the last 15 years. But the friendship is not of the nature that I would lie if his new special was less than great. I would be silent if I felt like what I saw was mediocre or even merely very good). What I saw Saturday night in Brooklyn (this will contain no spoilers as far as material) was as important a special as there has been in the last decade. But its importance does not merely stem from its deep dive into Gulman’s mental health struggles, which give the framework to The Great Depresh. Rather, it stems from the fact that it is hilarious. In this age of cop out one man shows, mediocre stand ups elevated for their social media followings or podcast metrics and teary confessionals being praised as great comedy, despite the paucity of laughs, Gulman has offered definitive and hilarious proof that stand up comedy can still be used to turn pain into laughter, and not just applause and whispers of “how brave.”

When I arrived at Roulette on Saturday there was a long line (I was attending the second show). As my girlfriend and I (she bought the tickets – I was offered comped tickets, but in this age of “gimme free content” I believe in paying for great musical, comedic and pornographic artists) approached the entrance Judd Apatow exited the building (he is producing Gulman’s special for HBO).  I briefly contemplated kidnapping Apatow (he was only surrounded by three women, all of whom I think I could take) and demanding he produce a special for me, but I thought better of it.  When we got to our seats (the balcony – we were too late for the lower level) and it was the only time I was disappointed the whole night.  The leg room was a tight fit, which felt ironic because Gulman, at 6’6″, is the patron saint of tall comedians (apologies Brad Garrett). 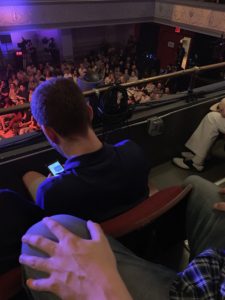 Without discussing any of the specific jokes I can tell you that Gulman’s set, running about 70 minutes, started with an upfront admission of his recent mental health struggles.  I actually briefly feared that he was going to do a one man show confessional (I was the Doubting Thomas to Comedy Jesus), but within a minute he was into classic Gulman. It almost played like a comedic biopic, where the movies starts a little before present day to showcase the low point, but then we go back to childhood and work our way forward chronologically.  It was all the language and in-depth story telling that are signatures of Gulman’s brilliant comedic style, but applied almost exclusively to autobiographical material (if Apatow is reading this I would like to nominate myself to play Gulman in the biopic or limited series).

So the show was an A. That’s the easy part. When a great comedian takes his game to a more personal level it should not be surprising when it is great.  But what made me happiest, as someone who cares about stand up, is that this special will re-set the current standard for personal pain as great stand up. No longer should we have to choose between good comedy and teary confessional spoken word as two branches of stand up – stand up comedy requires laughs and Gulman’s latest proves that a truly great comedian need not sacrifice laughter for truth and depth.

And on another note I think this is exactly the special that HBO needs.  They have been in a particularly long drought (with exceptions for Michelle Wolf’s strong special a few years ago), which is painful for a network that gave us Chris Rock, George Carlin, Dave Chappelle and others. Netflix now has a gluttonous chokehold on specials (but seriously Netflix – call me, I’m really good and need the money), but with Amazon inking a deal with Jim Gaffigan and now Gulman delivering a masterclass for HBO perhaps the prestige can return to HBO, or at least loosen the Netflix monopoly.

So hopefully my “Comedy Jesus has come to save comedy and HBO” has not set the expectations too high for Gulman, but on an equally serious note for Judd Apatow, if you don’t want to cast me as Gulman in a limited series (though please consider my tour de force sketch as Gulman in Comedy Academy Episode 3) my other thought is developing a movie with Gulman and Jon Bernthal playing brothers (Gulman is the big sensitive brother, Bernthal is the ex-military jerk who gets kidnapped and requires his large, but gentle and cerebral brother to save the day. Hilarity and life lessons ensue). I think it’s comedy and cinematic gold!  But if not, at least Gulman and Apatow are going to give the world a great and needed comedy special.

Come on folks – Bernthal would make a great brother to Gulman in an action comedy!

9 Responses to Gary Gulman: Putting The Funny Back in Painfully Funny