Comedy Weekend Recap: The Knicks, Adam Sandler and a C-Bomb

This weekend was a very busy one for me.  First I had to take my Dad to Dunkin’ Donuts on Friday for an afternoon of father-which-son-of-mine-are-you bonding (he is 82 and like Tony Soprano’s mother I am starting to see a blur between loss of memory and loss of respect for his younger son, which is making it more difficult to know when I should be sympathetic and when I should be offended).  Then I was #blessed enough to have  a friend with some serious comedy connections hook me up last minute with great seats to the NY Knicks-Utah Jazz game (if you are new to my site I am a big Utah Jazz fan – coming from a mixed marriage family marked by hostility I always found the harmony that Malone and Stockton played with to be oddly reassuring).  The seats actually belonged to a major mogul in comedy, so naturally I taped my impression reel underneath his seat for the next game he attends himself.

One of the great things about attending Knick games in the rich seats is that you get to see 12 year old kids with pouty looks begrudgingly marching into Madison Square Garden for tickets costing over $400 per game as if they are doing their fathers a favor leaving their PS4 and horny middle school teacher to sit in seats most American adults will never be able to afford.  Another thing I observed during the game was that t-shirt gun technology is out of control.  As gun violence has continued to make headlines it has given cover to the absurd NRA-porn level t-shirt gun technology.  There was one that looked like a massive Gatling gun of polyester.  It is only a matter of time until 11 year old Seth has a t-shirt smack him right in his smug 4th row seat face.  Then we may see real change to this horrific t-shirt gun technology. 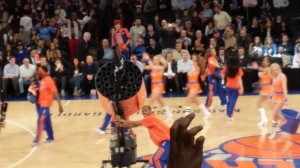 The game ended up being a horrible beat down of the Utah Jazz, but it was nice to be in the rich seats.  I now realize that the next time I will be that close to the court will either be as a courtside celebrity (.01% chance) or as a survivor of a horrible tragedy being honored by the Garden (.02% chance).

Saturday was a monster Saturday.  From 745am to 430 pm I was filming my new sketch “Happy Madison Presents ‘Tyler Perry’s ‘ Old Testament, New Problems'” a parody of what would happen if film legends Adam Sandler and Tyler Perry combined their brilliant writing and film-making.  The shoot was exhausting (4 locations), but a ton of fun and will be my best (and hopefully biggest) work to date.  Here is the photo that will be the promo shot for the video: 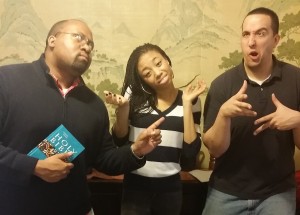 So super tired and relieved of the stress that I always feel when filming one of my sketches I headed to Comedy Outliers, a show run by two NYC comics at the Sports Bar at Webster Hall.  The crowd was big and enthusiastic and several audience members had a look of hopeful happiness in their eyes and that is when I knew it might go off the rails for me.  I was tired and had just witnessed an awful mother-daughter combo a block from the bar.  Let me explain.  I was tired, which put me in a susceptible mood to be pissed off.  Then, a cab was stuck in the crossing traffic so although I had the right of way I let the cab go because not letting him go would hold up the 20 cars waiting to go north on the avenue.  As the cab started to go forward the mother-daughter duo stepped into traffic, oblivious to the rest of the situation. The mother was a formerly attractive blond (she was halfway to leathery Robert Redford stage) and her daughter was a semi-chubby 13 year old brunette (i.e. a slightly hotter Lena Dunham). And the daughter yelled out out “Excuse me!” to the cab driver, and the mother pointed for a good three seconds at the walk sign (cab driver was going about 6mph so no one was in any danger).  And as I looked at these two – a woman who had most likely married a less attractive, more accomplished man, otherwise how does one explain the daughter with worse looks, but equally awful character as her, and her offspring and thought – this is just like the Evolution of Man poster, except instead it is like seeing the Evolution of Cu*t.

Why did I share this story?  Because I took a risk and made it the first joke of my set.  And I actually had the crowd in a combination of curiosity and laughter until I hit the C bomb.  And that look of hopeful enthusiasm half of the crowd had disappeared and the four laughs for the line could not heal the damage I felt from the other people’s silence.  I worked doubly hard the rest of the set, but jokes that are touchy, but usually kill, were now tainted by the fruit of the poisonous C-Bomb tree.

After conversing with a couple of comedians I left the bar, bought a Hostess Apple Pie and did this (the usual way I celebrate after a less than perfect set):

Sunday was just lots of media watching and I will not get into True Detective today because TOMORROW”s Podcast episode will be dedicated, in part, to me arguing against the wave of love for that show (a B+ is solid, but when everyone treats it like an A, I get pissed).

For more opinions, comedy and bridge burning check out the Righteous Prick Podcast on Podomatic, iTunes and NOW on STITCHER. New Every Tuesday so subscribe on one or more platforms today – all for free!