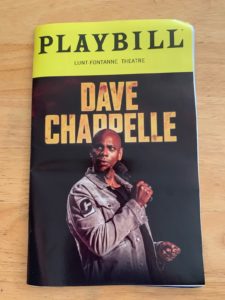 On Thursday morning I woke up to read my NY Times and started with the Arts section when I saw a large picture of Dave Chappelle and what I assumed was a review of his current 2 week stint on Broadway. The article was by NY Times comedy writer Jason Zinoman and from the headline I decided I did not want to read it. The vibe I got from the headline and first paragraph was that Chappelle was retreading old ground and punching down.  Also I did not want a spoiler for a performance that I had paid an exorbitant amount to attend (doggystyle seating – my girlfriend was sitting in the aisle seat in front of me).  My basic assumption was the Zinoman was just following the current, Nanette-infused sensibility of what should be comedy, what is good comedy and how 18 different progressive buzzwords should be dictating what stand up comedians perform.  Having enjoyed Chappelle’s recent Netflix efforts and defending that material against accusations of transphobia I just assumed this was more of the same. Well… (*Malcolm Gladwell podcast intro voice*) it turns out… maybe Zinoman had a point (still haven’t read it though).

The show did not start until about 8:25 (8:00pm show) when DJ Trauma (Chappelle’s road DJ, a concept I hate as I type it) began playing his own songs before Chappelle’s opener, Wil Sylvince did a 20-25 minute set.  Then DJ Trauma began a medley of hip hop to get us all pumped up for Chappelle.  He did something that I found hilarious – you know how bands will stop singing so the audience fills in (Steve Harvey, I believe, mocked this in The Kings of Comedy)?  Well DJ Trauma decided to stop playing the records so we would fill in – so I guess in 2019 DJs are tired of doing all the work of playing a song on their MacBook.  And then, finally, the man came out.

Chappelle started his set insulting the New York Times, which despite having had two relatives work for the NYT in the past, I laughed at because I assumed he was going to stick it to another progressive (where I lie politically on most things, but not nearly as much within the art of stand up) writer who wants to dictate to a master what is and isn’t OK.  I am going to try and not spoil any jokes, but the vibe I got from Chappelle’s set was of a guy who was a little angrier than normal and felt it was his job to be Louis CK’s proxy or defender. What I mean by that is his topics included trans people, the use of the word fa**ot and school shootings – he was almost going through a checklist of what got CK in trouble after one of his first post-hiatus performances.  And I will admit I was never a huge fan of CK, but I actually laughed at his material that the comedy police decided was now “hack” and “disgusting.”  Now, for most of Chappelle’s set it was A level material on some very touchy subjects. Exactly the type of hilarious tight rope walk a lot of people like me want to see in stand up comedy (his dismissiveness of white opioid addicts, his discussion of getting a gun, his school shooter material, his insulting of the women’s soccer team and many other things were legitimately great comedy and well within what should be allowed for comedians to joke about and risk failing while attempting).  But during some of the material, for the first time in my watching Chappelle for decades, I felt like he was veering into Edge-Lord, “Hey Man I’m a fucking comic – this is what we do bro” kind of “own the libs” peacocking. The appeal for me of Chappelle has always been the laid-back genius of what he does and how he does it. This was absent during the bits of the show that were the weakest.

Now there is a chance he was still working on material, but based on the price of the tickets and the high profile of the residency I have to imagine it is close to a finished product.  And I must say – two sections of the show actually made me cringe both because of the laziness of the material and the reaction of the crowd.

One bit was about the word fa**ot.  He said that Comedy Central did not want him to do a sketch centered on the word. He then asked Comedy Central why he was allowed to say ni**er all day on air, but not fa**ot.  The woman’s answer at standards and practices was that he isn’t gay. Chappelle’s answer to that was “But I’m not a ni**er either.” And the crowd, full of a cross section of people who apparently want the freedom to call people fa**ots, cheered like he had just said something profound and brave. He then said that a lesson he (and now Kevin Hart – the other comedian he seemed intent on defending through word and deed) learned is that you cannot make fun of LGBTQ people because “they” run Hollywood.  I don’t say this lightly; this moment sucked. First off, the analogy that Chappelle made to defend himself was so lazy and wrong it doesn’t work.  Clearly the implication was “you are black, so you can say the N word, but you are straight so you can’t throw around the F word” and he turned it around in a stupid way but that still got Church “mmmhmms” from the Black members of the audience and “whoops” from the NY Post reading White people in the crowd.  Then there was the direct claim that a group running Hollywood was stifling only slurs against themselves.  And then there was the whooping of the crowd at it.  I don’t care if you think this is hyperbole or snowflake shit, but I’ve basically defended everything in comedy that isn’t Kramer’s N word rant and unlike Zinoman, have been a comedian for 16 years, but this felt like being at some Trump rally for a few minutes.  Unlike a lot of the great comedy Chappelle shared last night, this did not feel like pushing the envelope to prove a point about comedy and speech. This felt like a white person asking to say the N word (which tellingly a white person did after the show during a Q&A which was resoundingly booed by white and black alike).  Except in the case of Chappelle, it was a black man demanding the right to use a slur of a group he doesn’t belong too and then claiming some racism/adjacent white privilege for why he wasn’t allowed to. And the crowd loved it.

The second bit that bothered me was probably the worst joke in the whole show, just on a comedic level.  I thought his trans jokes on Netflix were funny.  Problematic, but funny and at the end of the day that is my metric for a comedy special. But he starting basically retreading the CK bit (if I identify as a woman, why can’t I identify as an Asian person – CK did it as a tree or something) that got CK into some heat recently. One of the reasons why I think Chappelle was trying to avenge CK in some way with this hour. And the crowd was loving it (he had other LGBTQ jokes that were much more skillful and funny).  And then he just started doing an Asian person impersonation that felt like a 1950s stereotype and the crowd ate it up (having worked plenty of black rooms on the road and in DC when I started I do know that for some reason doing basically racist impressions of Asians still seem to kill in a lot of those rooms).  Now – maybe he was just doing this to stick his finger in the eye of political correctness.  This one felt so simple and offensive that that might actually have been what he was doing.  But it was beneath most open micers, let alone a legend.

The rest of the show was great, Chappelle is an all time great, but for the first time I felt like I could see the beginning of the end of Chappelle as an artist at the peak of his powers.  At least for me.  Our country has shown there is a deep thirst for offensive commentary and someone who will stop sensitivity and political correctness from being used as dual cudgels to hammer people into a future they haven’t signed on for.  And maybe I am wrong – Chappelle clearly has lots to say and a lot of talent with which to say it.  But he stopped doing Chappelle Show because he felt like he was giving white people too much license to laugh AT black people.  But has middle age, millions and the current climate shifted him into a guy who now finds it OK to rally the MAGA folk and his loyal fans into a group that dismisses all political correctness and other marginalized groups?  It wasn’t OK for white people to laugh at ni**ers in 2004, but we can all come together and laugh at these politically correct fa**ots in 2019?  My credentials and past writings speak for themselves so I don’t need to heed anyone who thinks this is some soft, PC bullshit blog.  In those two bits Chappelle was being lazy and worst of all unfunny – maybe to prove a point, but the point to his audience, based on their reaction was not “we need more honesty!” It was “yeah I should be able to say fa**ot!”  And I am not against using any language in comedy. I have laughed at entertainers’ usage of the fa**ot in some movies and comedy, but the point of  that usage was not to defend the usage of the word.

I don’t normally dissect comedy like this or treat it like a term paper, but I am only doing this because it felt so stark. If I had just listened to a Chappelle album with last night’s set I might have just said “Great album, but tracks 4 and 6 sucked,” but being in a theater with thousands of people applauding not the humor, but the perceived truth of those words, was a lot more uncomfortable than I expected to be at a Chappelle stand up show.

The Jay Inslee Fundraiser Recap
Djokavic is The Best. But is he The GOAT?6
J-L Cauvin Broadway New York Times Chappelle