Normally my road recaps are about weeks or weekends performing comedy somewhere in America. However, this recap, because of its greatness and volume of information and humor will be my first road recap (that I can remember) that is simply a review of a non-comedy trip. I went to my girlfriend’s 20th high school reunion this weekend in Arlington, Virginia.  Before you are done reading you will read about slavery, pornography and something far more depraved – a lying scumbag on Amtrak. You will also learn about a legitimate comedy milestone for me as well as chaperoning my Mom to a Bill Maher stand up comedy performance (well, that will be on this week’s podcast).  So get ready to learn, laugh and hate!

As usual, any trip via Amtrak for me will involved the “future glimpse at a dystopian future” known as Penn Station.  My girlfriend and I saw the red caps bringing  bags to gate 12 East so we, along with a dozen or so other geniuses, lined up there to beat the eventual crush of thousands.  Then, the worst thing happened: the gate was announced as 12 West, which meant we were at the back of the line we thought we were starting.  As Jesus and Amtrak said, “The first shall be last and the last shall be first.” Of course there was a guy I remember cutting about 120 people and I wanted to throw him down the escalator, but then I remembered this is not a Trump rally, just Penn Station.

When we got to DC we headed to the Hyatt in Rosslyn, VA which was 2 blocks from the site of the reunion.  We then ate at a nearby place called District Taco, which was incredibly delicious (including the rare Boylan soda fountain), so expect a big bump in sales after this endorsement DT.  After that it was time to meet up with my girlfriend’s two best friends from high school and their significant others. Here is where things start to get interesting.

There are three main facts learned at the dinner:

We will cover the first two in the “Boogie Night” section, but the third was interesting because when I asked my girlfriend about being the mean girls in high school, she did not deny it. Instead, she said “I think I was the nicest one!” which is a denial worthy of a Sean Spicer press conference.  When I asked one of the two friends later in the weekend, there was not a flat denial, but rather a series of explanations, which confirmed they were the mean girls.  So I wondered if I, along with the two other significant others were being set up as human shields for some 20th Reunion school revenge shooting.  The rest of the night I just paced around the hotel like Marion Barry yelling “Bitch set me up!” 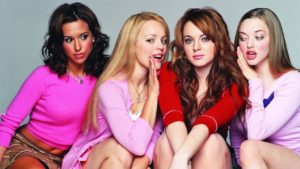 The reunion was not fetch.

Too Much Black History!

The next morning, my girlfriend and I went to the National African American Museum of Lit History and Fire Emjoi Culture.  The place is stunning, though it requires a full day.  We spent four hours there and only got through half of the museum (the lower three levels are the hard core history from slavery through President Obama and it involves a lot of reading, which keeps things to a fairly slow pace, especially when considering how densely packed the large area is with information, displays and artifacts. The top 3 floors cover more culture, sports, etc. and I figured we could see that on our next trip to DC.  But at one point, my girlfriend and I were feeling so overwhelmed by the sheet depth and quantity of information that I just yelled out “THERE ARE TOO MANY BLACK… PIECES OF HISTORY!” at which point I got a lot of stares. I quickly pulled out a copy of my Sprint Cell Phone bill to prove my half blackness and everything was forgiven.

And as if there was not enough black history going on, while in the museum I got a message that my album Fireside Craps would be the first of my albums to make it on to the Billboard Comedy Charts (so look for annoying photos on social media from me when that happens this week).

Among my chief complaints about the museum (after they should have gotten twice the amount of space – though if they were limited to this square footage it is a marvel of design fitting everything in in the manner in which they did) is that there was no display dedicated to angry white guys yelling “But my parents didn’t own slaves!” nor was there anything dedicated to white women running amok with black twitter vernacular.  But they did a strong job nonetheless.  Though sadly, I expected to see a display of Amber Rose next to either Sojourner Truth or Rosa Parks, but I guess sex positive heroes have not found their place in the museum yet!  Here is a photo journal of highlights from my first trip: 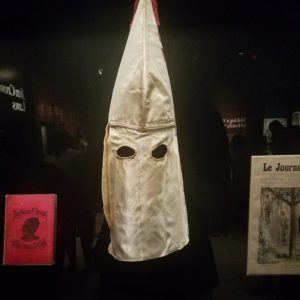 The first MAGA hat on record 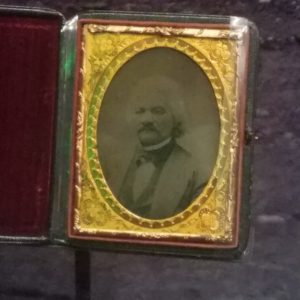 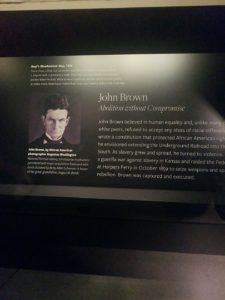 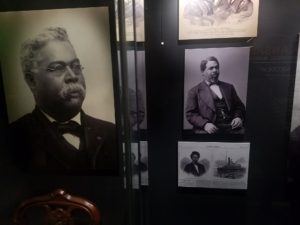 One of the first (if not the first) black congressman: Keenan Thompson of SNL 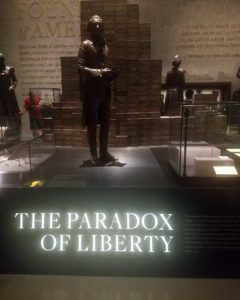 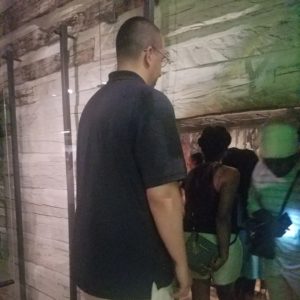 I was too big too live in sharecroppers’ cabins 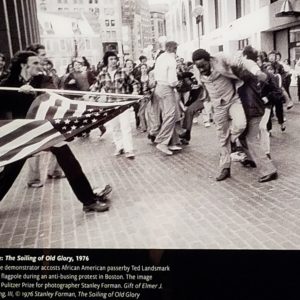 Boston in the 1970s. One of the great horrific photos of all time in American History 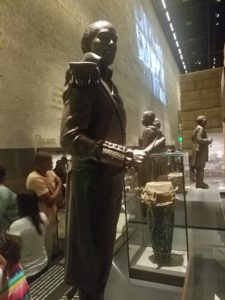 Toussaint Louverture – leader of the Haitian Revolution and the 2nd most famous person of Haitian origin in the whole museum that day! 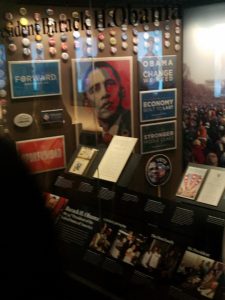 Part of the display dedicated to President Obama – the 2nd most famous bi-racial person at the Museum that day!

Now it was time for the reunion, which was located in a beautiful top floor space overlooking the Potomac River and basically every landmark in DC.   However, because of the cost of renting that space the reunion was left with beer, wine, an appetizer station and someone’s iPod playing hits of the 90s over the PA system. It felt like someone buying a Park Avenue penthouse, but only being able to afford to furnish it with an air mattress.

Church and the Devil

On Sunday morning I woke up to head to Mass before catching the train (I upgrade my girlfriend to the Accela so we could take the train home together #ReunionMogul). I had originally needed to leave earlier than her because I was taking my Mom to see Bill Maher in Newark Sunday night as her birthday present (I stored up just enough African-American Museum Wokeness credits to attend the show – that show and experience will be recapped on this week’s Righteous Prick Podcast Tuesday morning).  I went to St Michael’s Cathedral near the DC Improv – the Church that Pope Francis And I attend while in Washington. DC.  However, Mass was at 830am and as I found out the hard way, the DC Metro does not open until 800am – what kind of major city does not open their local train until 8am?!  And then it was a 20 minute wait for the train once it opened (they should start a couple of trains in the middle of the route, but what do I know).  So I was late to Mass, but I was sure to pray for the DC Metro system (“love your enemies/haters” – Jesus Chris and Katt Williams).

I then met my girlfriend at Union Station and we got on the Accela to NYC.  Once we hit Philadelphia the train started to get crowded. A few people asked the man sitting in front of us if they could sit with him. He said that the bag next to him belonged to someone who had gone to the Cafe car.  When we got to Newark (ten minutes from NYC) and the train was even more crowded and he told a woman “This guy has been gone for like an hour so you can probably sit here,” but she declined. Well, as we pulled into NYC this piece of shit stands up and picks up the bag. It was his bag. I almost said something to a conductor when he claimed it had been left there (hey, what if it is a bomb), but I didn’t.  I wanted to say something to the guy as we were leaving, but all I really wanted to do was set his bag on fire, so that would not have been constructive.  From his affected mannerisms I think he may have been in town to celebrate PRIDE Day/Week/Ethnic Female Guts Spilling Out of Crop Tops Day in NYC, but he should have been… ASHAMED! *drops mic* 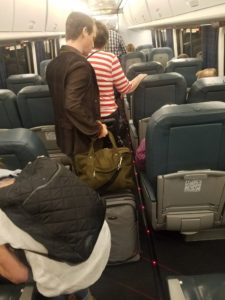 The best shot I could get of the guy on Amtrak. Should be on FBI’s Most Wanted list

Get J-L’s New Album Fireside Craps on iTunes for only $4.99

Subscribe to the Righteous Prick Podcast. New every Tuesday. This week a full review of the Bill Maher show in NJ + Mateen Stewart as guest.