his weekend was one of those rare weekends (62% of all my weekends) when I was not booked to tell jokes for minimal profit.  So I did the next best thing – I brought my comedy skills to a wedding in DC for free (food provided, no room – like most gigs now)!  My friend Ross was getting married to his lady of almost ten years, Anne.  Interesting story – I met Ross in my first and only Improv class (the thinking was I am new to stand up so let me bolster my overall comedy game, includign the comedic arts that people find annoying) in DC when I was just a few months into starting as a stand up comedian. He has been one of my most loyal and valuable supporters/critics of my comedy (for those of you that like my podcast he was like Josh Homer 1.0).  When I left DC in 2004 to be a Bronx ADA, Ross met Anne shortly thereafter, proving that there is no good luck as good as J-L relocating to another part of the country from you #blessed.

I arrived in DC and got a sweet deal at The Melrose Hotel, which was right across the street from McFadden’s where I would occasioanlly drink when I was just a DC law student with loads of potential.  The Melrose was super nice, to the point that I think hotwire.com made a mistake with the price they gave me.  My room was spacious and beautiful and came with a section of the US Constitution on the wall, as I usually request when on the road.

I went for a nice stroll through Georgetown to the Ritz Carlton Georgetown where the wedding was.  It was a nice fairly small ceremony and the Maid of Honor was Bridgette, a cute female bull terrier, who rumor had it was a real whore with a couple of the groomsmen later that night.  I thought it was cute, given the small ceremony, for Bridgette to be involved, but can you imagine being the bridesmaids and losing out to a 112 year old Bull Terrier?

Then it was time for me to shine. The miscellanous wedding table.  I was sitting with four couples and one married dude whose wife was back home.  Definitely one of the most fun wedding tables I can remember in my wedding career.  Instead of feeling like Lebron on the Cavs, I felt more like Chauncey Billups on the 2004 Pistons – a real solid team effort from everyone at the table.  Added bonus was sitting next to a celiac (the gluten diseased people) which meant double dinner rolls and double cake (cut me some slack I dropped 40 lbs since March) for me. I even asked for permission by the time I took her third roll.

Due to my extra working out, my lack of partying conditioning this Summer and my insomnia over the last month I left around 1015 and went back to the Melrose. I fell asleep and was having a nice time until my hotel alarm went off at 3 am.  And then again at 530 am.  Here is something I think all hotels should do (this has happened to me 4 times in my life) – the maid should have to reset or turn off all alarms as part of her (or HIS #equality) duties.  As revenge I jerked off into the shampoo bottle and then cleaned it off like it had never been used.  It is a thing I like to call “Shitting it Forward.”    But seriously, there is nothing more annoying then having exactly one night a week to sleep well, having swank and cozy conditions to get eight hours and then, with 6 gin and tonics and a belly full of gluten, getting jolted awake at 3 am.

But overall, a great little trip back to my old stomping grounds. Here is a throwback photo of Ross and I (and comedian Danny Rouhier on the left) in 2003 or 2004 when I started. 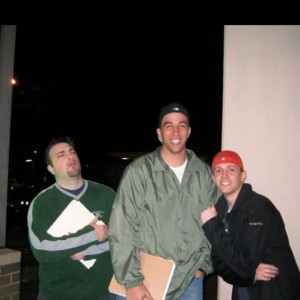 Friday was the rare double dip for me – I was booked on a gig at Gotham Comedy Club at 7pm and then headlining the 1030 show at Jokers Wild in New Haven. The Gotham show went quite well… for the other comedians, but I closed it to such mixed response I was hoping a Daily Beast correspondent might be tweeting about it so I could vent some aggression after.  The crowd was not large and I got great response from the comedians and half the crowd, but I am still haunted by the face of the older woman rolling her eyes and shaking her head at me during numerous bits.  It was actually a very good lineup of people I have never seen do comedy, which means Vegas has the odds of all of them advancing past me in the business within 6 months.

After the Gotham show, Danny took me and another comedian over 6’5″ named JP (seriously – height and initials – GET YOUR OWN GIMMICK!) into his two door car and we hauled ass to New Haven for the 1030 show. With about 70 pounds and a whole lot of anger advantage over JP I was granted shotgun.  The ride to New Haven turned out to be quite fortuitous because it turns out JP does an impression of Anthony Jeselnik that is so perfect that I have cast him (instead of me) in my November/December sketch “Comedy Academy” (I will still be portraying 4-5 comedians, but I know enough not to let JP’s impression go to waste – expect a Kickstarter/shameless campaign for this one).

We arrived in New Haven and it turned out to be mostly my favorite demographic for a comedy audience – white chicks under 26 who are friends with one of the comedians on the lineup.  I did not go up until around 12:15 am, when about 20% of the crowd had walked or passed out, but I was very proud of the set I had.   It was a combo of using good material and taking time out of each bit every few minutes to verbally spar/flirt with a group of drunk women who would not allow the show to be about anyone but them for more than the length of a Beach Boys song.  It was one of those shows where I said to myself: “I am glad for all the good gigs and especially the bad gigs that allowed me after ten years to have a combination skill set to make this a fun show, even though I had to work harder than usual.  And why have I spend over ten years honing this skill set for half a day’s pay from a law firm?  What if I just run in front of traffic right now?”  Naturally I sold no CDs after the show, but I did get about 9 appreciative handshakes, which were heartwarming.  Danny, JP and I then headed to a 24-hour Wendy’s for a victory meal (and it was also a rest stop with showers available – I wanted to check them out just to see if I would see a Republican member of the House having a gay rendezvous and break the story for a nice finder’s fee, but alas I did not – just a bunch of truckers making tender love to each other).

But for all the comedy excitement that Friday contained, it was just the undercard for the weekend.  The main event was the wedding of John Moses, a great comedian and The Great Over 30 Hope (in boxing they are always looking for a great white hope, but in comedy circles, good comedians over thirty who have not gotten their shot are looking for a Great Over 30 Hope).  Here are the notable highlights:

All in all a fun weekend in and around comedy.  Time to get back to submitting resumes for day jobs.

For more opinions, comedy and bridge burning check out the Righteous Prick Podcast on Podomatic, iTunes and NOW on STICHER. New Every Tuesday so subscribe on one or more platforms today – all for free!