The Best Thing My Trump Impression Got Me

This year has been a terrible year for the world and so many people. But for awhile it seemed that I would be one of the few people along with Jeff Bezos to have a career year. Once my Trump impression took off in March I began gaining fans by the ten thousands and getting a lot of money from digital platforms like YouTube and Cameo.  There were frustrations, expected and inexplicable alike, but by almost any possible measurement my year was going great, let alone graded on the curve of a global pandemic.

By late May I had not seen my family in Riverdale (Bronx, NY) since early March and my Uncle John’s 71st birthday was coming up. I grew up with my uncle as my neighbor.  From 1986 to 2020 my uncle lived directly across the hall from my family (which for the last few years was just my mom, his sister) so needless to say he played an outsized role in my life compared to the typical uncle.  He was also a tough person to buy gifts for sometime.  And despite my unexpected positive economic numbers I had no idea what to get my uncle with my new money during a pandemic. And then I had an idea.

During my rise to Twitter infamy several celebrities that I am a big fan of began commenting, retweeting and following me. Pop stars, Emmy winning actors, legendary actresses and many other people of that ilk were in my mentions frequently. But one new fan stuck out in my mind as it related to my uncle: Bob Gunton.

For those of you who do not know who Bob Gunton is by name, when I say The Warden from The Shawshank Redemption, there should be no other questions.  In one of the most popular and acclaimed films of my lifetime his performance stands equal to (and for some, like my uncle, surpasses) the great work of Tim Robbins and Morgan Freeman in that film.  He has been in many, many films and TV shows, but the iconic and defining performance of his career is Warden Norton.  And for my uncle, a lover of movies generally and Shawshank specifically, Gunton’s performance was an all timer. Anytime it was on TNT (44.7 million airings and counting) he would say “Why didn’t Gunton get nominated?”  But it went beyond that. My uncle, armed with Google and a computer in the 200os became a Google/Wikipedia expert on anything or anyone that piqued his interest. Gunton’s life story of being a lifelong Catholic that attended seminary and receiving a Bronze Star in Vietnam were some of the Wiki details that my uncle shared with me about Gunton.  Almost as if their shared faith and an impressive service record further validated my uncle’s appreciation of his acting work.

So in late May, after receiving multiple complimentary tweets from Mr. Gunton I decided to write to him to ask a favor.  I relayed my uncle’s appreciation of Mr. Gunton’s work and asked if he would be willing to send him a signed headshot. The answer was an immediate yes and it was placed in the mail the next day.  The headshot arrived on my Uncle’s birthday and was opened separate from my card so the surprise was total to say the least.  When you know someone long enough you know when they really appreciate something.  My uncle’s response was akin to the janitor clapping at the end of Rudy or Mr. Miyagi’s smiling nod to Daniel at the end of The Karate Kid.  Not hugely vocal, but undeniably pleased.  I knew because the next day we had a chat where he basically described the headshot in greater detail.

My uncle had always wanted me to focus on my legal career and I think comedy always seemed like a fool’s errand to him (and for most of my 30s it felt that way to me as well).  But the Bob Gunton headshot was an unintended flex of how my talents had finally reached a broader and impactful (to us at least) audience.  I genuinely cannot remember ever getting him a present that seemed to make him happier and it would not have happened if my impression had not blown up during Covid. So, at the risk of sounding hokey, it is clear that the money and increased attention and opportunities have to be considered secondary to being able to get the headshot for my uncle.  A month later he told me that he had framed it in a nice frame. It said “Hey Uncle John, Happy Birthday! From The Warden (signed Bob Gunton)” 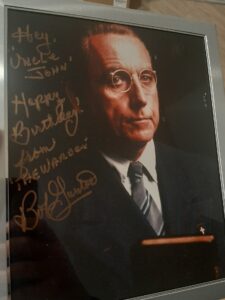 On August 12th I got a phone call while I was sitting at my desk wearing a ball gag around my neck, which is how so many bad stories begin. I had just finished recording a video doing my impression of Mike Pence (hence the ball gag prop) when the phone rang. I picked up and it was my uncle. He had been waiting for medical news and the news was not good.  A few weeks earlier he had to get bone marrow tests because his white blood cell count was skyrocketing. His doctors believed it was chronic leukemia, but as I sat in my desk chair my uncle delivered the bad news to me: it was acute.  Instead of being able to just get oral medication he would have to start a chemotherapy regimen soon. Because the leukemia seemed to have changed from chronic to acute it appeared that it was aggressive.  I had planned on going to visit my uncle and my mom at the end of August, which was a week away, after not seeing either of them in person since early March, but now that would be delayed with his chemo. He would require a 5 day stay in the hospital monthly until his levels got back to acceptable. Unfortunately some other health issues emerged before he was set to go to the hospital so he had to go early.  When speaking to my mom she had told me that my uncle thought about bringing the Gunton headshot to the hospital.  We laughed about it and he did not bring it with him.

From there I would only have a few more conversations with my uncle.  A series of health issues emerged, but the chemotherapy seemed to strike a knock out blow instead of helping. It was a very rapid and unexpected decline and about 2 weeks after first going to the hospital he passed away.  We did not get to say goodbye as he was sedated for almost 2 weeks.  As we talked after, piecing it together it seems like my uncle knew his health was in trouble for a lot longer than he let us know.  He had purchased a lot of new things in the last year and it makes me think that it was a form of retail therapy and/or an attempt at optimism.  But I thought of the headshot as well. We laughed that he might want to bring it to the hospital, but as I think about it maybe he wanted it because it was a really bright light in an otherwise dark year. A year that denied him peace of mind for his health and usual contact with his loved ones. It is tough enough to go through Covid more isolated, but if you know that your health might be failing it can only exponentially increase a hopeless feeling.  And I think the headshot was something that meant so much to him and was so cool to him because it was a gift and connection he never expected in a year of bad news and diminished connections.

So it has been a tough year for so many in so many ways and my family is no exception. But I want to say thank you so much to Mr. Bob Gunton. Your work gave us decades of enjoyment and your kind and generous gesture touched my Uncle in a time when I did not know quite how much he needed it.  So for my Uncle I put my trust in the Lord, but your headshot belongs to me.