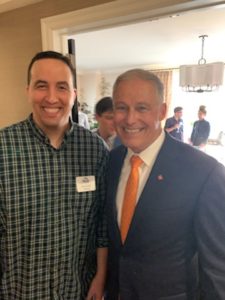 Last night I went to a fundraiser for Governor Jay Inslee – the candidate I think should be and needs to be the next President of the United States.  Before I give you the recap, a reminder that if you are a Democrat, Independent or (gulp) Republican reading this and believe that climate change is a huge issue, then go give Governor Inslee $5. It’s not a lot of money, but it counts as an individual donor to reach the 130,000 threshold for the Fall Democratic debates.  I think Governor Inslee should be president (I will give my face-to-face impressions shortly), but in 2016 I gave money to Bernie Sanders before voting for Hillary Clinton. I did that because I liked the direction Bernie was pushing the campaign and his discussions of income inequality. Even though I thought Hillary would be the better and more effective president, I thought Bernie’s message and voice was an important driving force (I wish he could have given that same energy to supporting her candidacy in the general election…).  Similarly, I think if you believe climate change is an issue of vital importance, giving any amount to Governor Inslee will guarantee that the most prepared and substantive voice on the issue can speak to the nation and make sure that whoever the Democratic nominee is in 2020 will make it a central issue.  So if you agree (and especially if you have not yet given) click on the following link to make a donation DONATE TO JAY INSLEE

Now on to the fundraiser!

My girlfriend (when you give a fat check you get to bring a +1… or maybe anyone who gave lesser amounts could, but I am telling myself that what I gave came with extra perks) arrived at the swanky Central Park West address and made our way through the lobby about 20 minutes after the start time (we both took a quick coffee shop break to cool off from the Summer subway sweat puddle we had become) I heard a voice that was very familiar.  As we approached the service elevator that was to bring us up to the fundraiser I said to my girlfriend “that’s him.”  As we turned into the elevator there were about 5 people in the elevator and a pair of tall blue eyes (I’m talking the Walkers on Game of Thrones blue) looking out from the back of the elevator.  My girlfriend and I then stood facing forward and she turned around and mouthed a “that’s him,” at which point I realized she wasn’t really listening to me as we approached the elevator 20 seconds earlier (admittedly dating a comic is probably exhausting on the ears).  We exited the elevator and were greeted into the apartment that was (at least) 2 stories. It was already fairly full and fairly hot so we made our way to a less crowded room where I found a small tray of cookies (it’s like they were calling me) – there were snacks of varying level of class around the apartment – the wine was near the shrimp cocktail and sushi, but I had found cooler air and cookies so I had no plans to move.

So first impressions of Governor Inslee can be summed up from the conversation my girlfriend and I had had afterwards:

GF: He’s kind of got a Kennedy thing going

Me: Minus all the issues and baggage – And those eyes were Blue AF!

GF: It was hot in the apartment, but he was in a full suit and didn’t seem to be sweating.

Me: You think his suit was made of dry-fit?

ME and GF: quick chuckle

(This is the conversation we actually had)

So around 6:45 pm the Governor addressed the crowd.  He gave a nice talk, which was probably more to convince the people who attended who are curious about his candidacy than people like me who are like “I don’t have money to invest in curiosities, so if I’m here I am fully on board.”  At one point the Governor referenced his Evergreen Ecomony Plan and said (paraphrasing) “It’s not just some wish list; it’s a governing document. And whoever the nominee is can use it.” (Having read it I must say it feels like something that would be on everyone’s desk in Washington D.C. on day one of an Inslee presidency.  It may not be a “fun” read, but my God is it deep and comprehensive and honestly, sort of inspiring to see someone put so much depth and care into an important issue.  But when the Governor said any nominee could use it a woman “awwwww’d” and I almost laughed out loud.  But then the Governor opened it up to questions and comments from the crowd. Here I am at that moment:

So a few questions got asked and then I raised my hand and was called on.

To summarize my comment (though I was more nervous than I think I had ever been since in my mind I was talking to the person I think should be the next President):

Basically in a room full of fairly upper crust liberals I wanted to say face to face what I said in my post-Miami blog, which is basically “you can seize some or a lot of the blue collar Democratic vote not by pandering, but just by showing what you’ve done and what your plan entails (but be sure to brand others as pandering).  A few minutes later someone asked “How will you get blue collar Democrats worried about tomorrow when they are worried about today (meaning climate vs paycheck)?” I leaned over to my girlfriend and said “That shit is in the plan!  The GI bill for workers in transition!”  Now the reason Inslee is running for President and I am sitting in a Starbucks blogging is because he spent the next 5 minutes kindly explaining the things he has done in Washington state and apply that nationally. My response would have been closer to: “What did I spend my life putting together a plan that will save the world if you are going to come to me and ask me that?  Get your ass to a Marianne Williamson event before I make climate change out of your (checks donation list) $250 dollar ass!”

In the few minutes I got with him he thanked me for reading his plan and I then told him as quickly as possible that I had not really known of him 8 months ago but because climate change is my #1 issue his candidacy seemed immediately worth supporting. But the more I read about him and his record the more I realized that he was clearly the best candidate and that more people needed to know about his entire record.  I then told him that some people (hint – KAMALA HARRIS) were already ripping off some of his lines in debates and that in Detroit he couldn’t play second to anyone on the issue of labor or on his record, when the candidates undoubtedly will try to pander to the Rust Belt.  We then said our goodbyes and I left to have dinner with my girlfriend.

Here is my assessment overall.  Governor Inslee strikes me as a fundamentally (and uncommonly) good man, with a great record, a great and meaningful platform and if casting a President for a movie I think he would be the first choice.  Seriously – imagine a Kennedy with an unblemished moral compass, a strong family man with a strong progressive record of leadership and accomplishment. A TV producer would yell at you and say he was too Norman Rockwell. So as a bonus, after meeting him I am also convinced he could beat the crap out of Donald Trump. Not in a Joe Biden, back in my day way, but in a serious Stone Cold Stunner way if Trump rolls up on in him in a debate:

So after reading his plans, studying his record, watching what feels like at least 50 media appearances and meeting the man I cannot stress enough that if you are not settled on a candidate to give him a real look.  And if you are settled on a candidate the way I was with Hillary, keeping Governor Inslee in the debates will only strengthen the party and perhaps allow more people to see his record (and his Blue AF eyes).  But just to show my restraint during the meeting here is what I said to my girlfriend before meeting the Governor:

“What I want to say to him is ‘A lot of these candidates have plans. Well you know what Mike Tyson said about plans? Everyone has one until they get punched in the mouth.  So in Detroit go METAPHORICALLY punch some of these candidates in the mouth and let them know that you are already beyond the plans phase in Washington State – AND CALL THEM OUT BY NAME.”  I thought better of saying it, but I hope after a visit to NYC he brings a little “Take-No-Sh*t attitude to Detroit.  And here is me photo bombing (with Hailee’s blessing) the future POTUS before speaking with him: